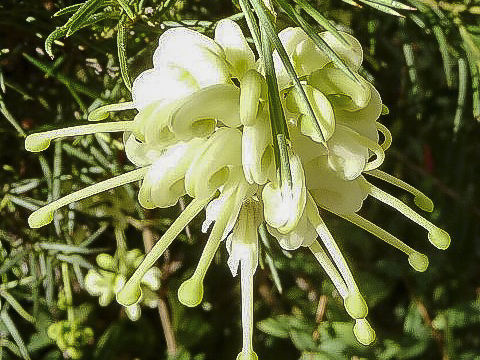 Grevillea rosmarinifolia ‘Lutea’ is a small shrub reaches a height of 40 cm with a spread of 50 cm. The leaves are light green, 2 cm long, linear with a sharp point. Flowers are cream with a waxy texture and held in large, conspicuous clusters. The lengthy flowering period extends from winter to late spring. 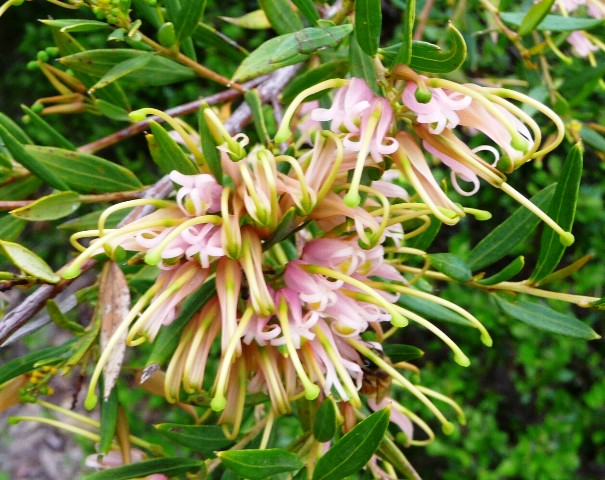 Grevillea ‘Forest Rambler’ is said to be a hybrid between Grevillea shiressii and one of the umpteen forms of Grevillea juniperina. It is a spreading shrub with bright green, prickly leaves and unusual translucent pale purple-pink flowers. Spring is the main flowering period although some flowers may appear at other times. The flowers are rich in nectar. 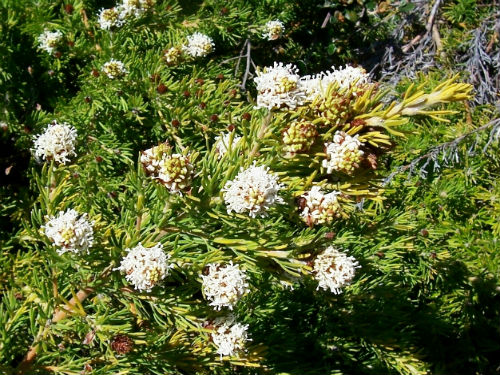 Grevillea crithmifolia has two forms. One is a compact two metre tall shrub. The other is a dense ground cover with a spread of at least two metres. The groundcover form is the one most favoured by gardeners. Light green leaves are divided at the end into three narrow segments. In spring plants are covered with dense clusters of white or pink flowers. Honeyeaters are attracted to the flowers. 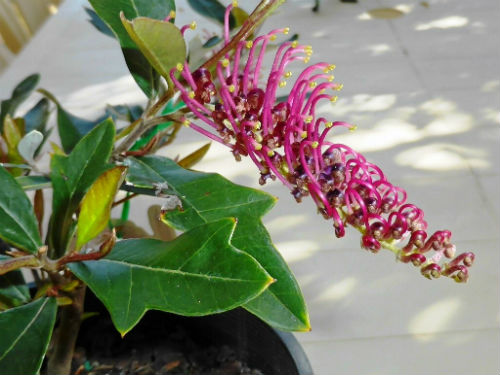 Grevillea ‘Bedspread’ is a hybrid whose parents are said to be Grevillea ‘Royal Mantle’ and Grevillea wilkinsonii a rare species from southern NSW. It is a dense ground cover with a spread of at least two metres. Dark green leaves are ten centimetres long by five centimetres wide and have serrated margins. 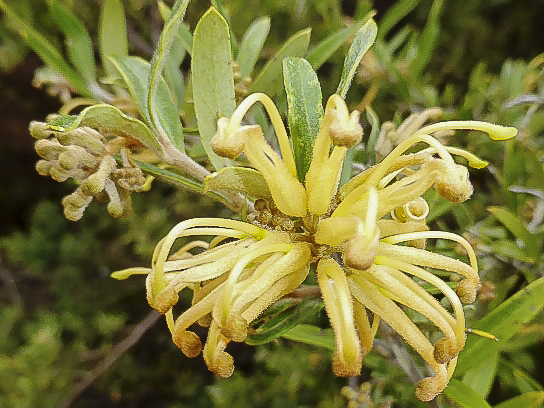 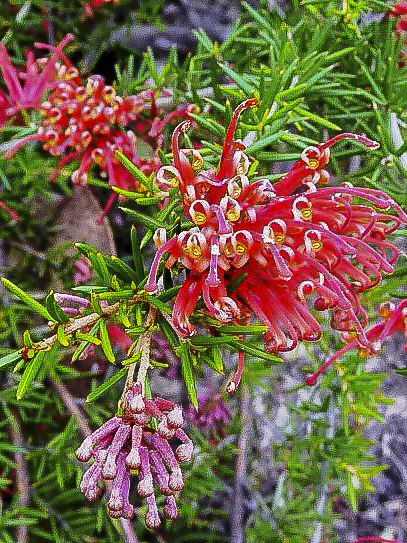 Grevillea ‘Allyn Radiance’ leaves are linear, lanceolate, about 15 millimetres long and crowned with a sharp point. Flowers are dark red and carried in dense clusters. The prominent blooms are carried mainly from July to February with sporadic blooming at other times. 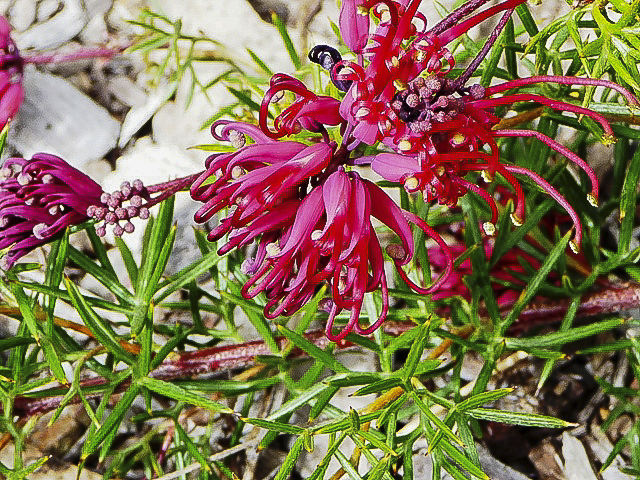 Grevillea acropogon is a prostrate to erect shrub reaching a height of 1.8 metres. The leaves are light green, lobed with a sharp point on the end of each lobe. Flowers are held in terminal racemes and are an eye-catching red. Blooms are rich in nectar and are frequently visited by honeyeaters. Flowering extends through spring. 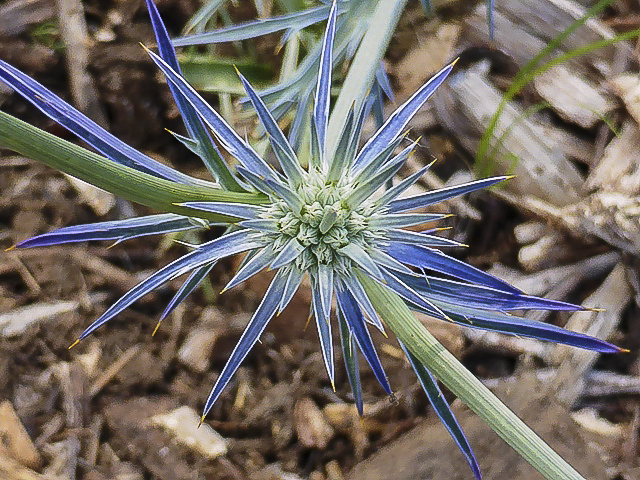 Eryngium ovinum is known as the Blue Devil and is in the Apiaceae family in company with flannel flowers and the carrot. It is a perennial herb, which dies down during autumn and emerges in late winter to flower in summer. Blooms last for many weeks and are an impressive sight with their bright and unusual blue colour. 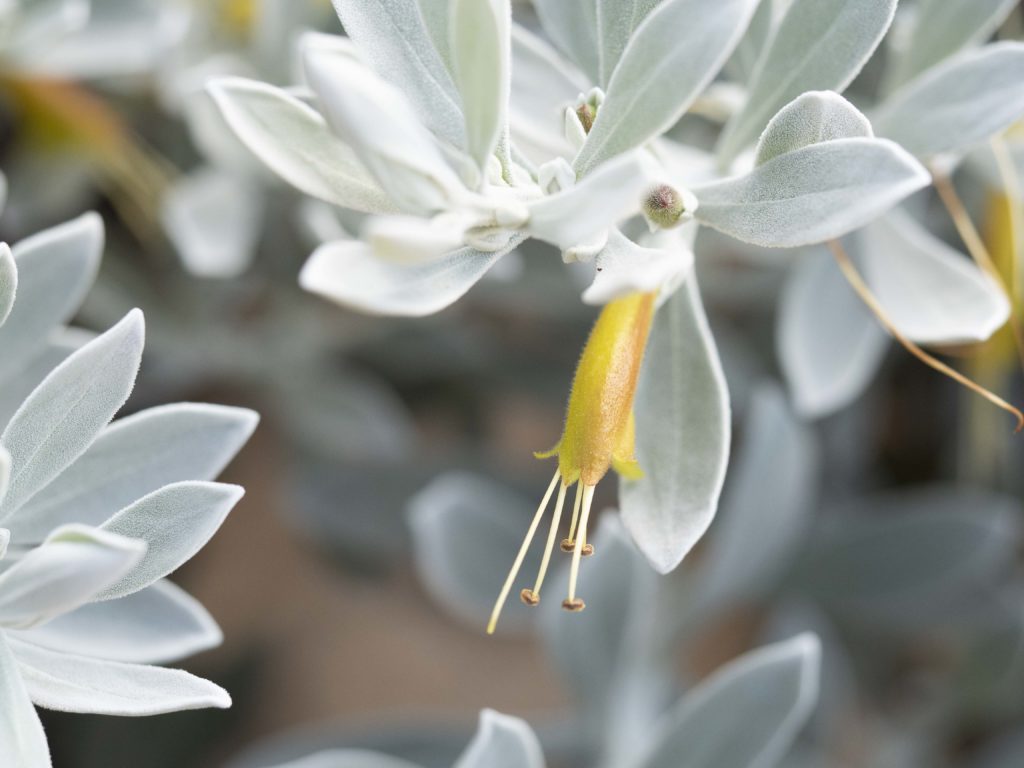 Eremophila glabra ‘Kalbarri Carpet’ develops into a dense ground cover spreading over two metres. Foliage is soft and silvery-grey. The tubular flowers are yellow, rich in nectar and form a ring around the stems at the base of each leaf. Blooms are profuse, conspicuous and appear in spring and summer. The leaves and flowers form a stunning living carpet. 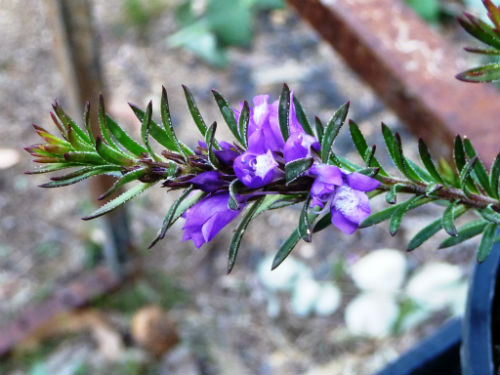 Eremophila densifolia is a mounded ground cover reaching a height of 60 centimetres with a spread of 1.5 metres. The narrow leaves are closely spaced (hence the species name) and have serrated margins. Leaf colour is variable and may be bright green or grey with a purplish tinge. Flowers are tubular, 12 millimetres long, purple, violet or blue. They form clusters close to the ends of the branches. 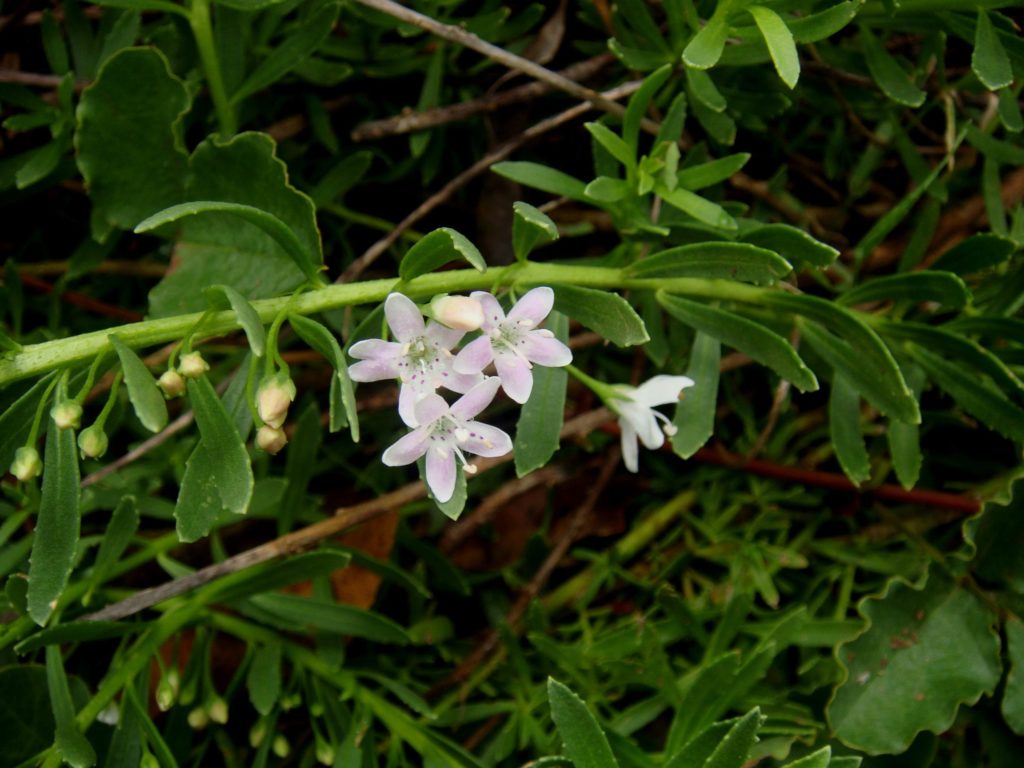 Eremophila debilis, Winter Apple, is a ground cover with a spread of about one metre. Leaves are bright green and tend to curve upwards, with a succulent feel. Five-petalled flowers are white, tinged with lilac and appear in spring and summer. Blooms are followed by small, fleshy fruits that turn purple when ripe and look like miniature apples, hence the common name. 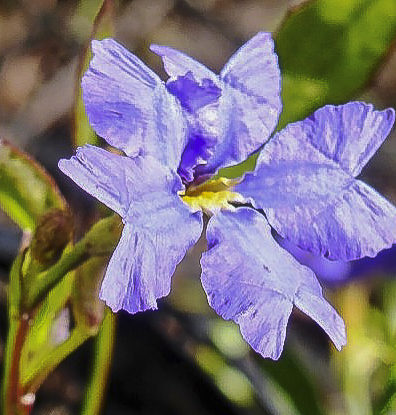 Dampiera stricta is a dwarf, suckering perennial reaching a height of 60 centimetres with a spread of up to one metre. The leaves may be up to 6 centimetres long, two centimetres wide, linear to elliptic in shape and may have a few coarse teeth. The flowers are nearly three centimetres across, sky-blue to deep mauve-blue. 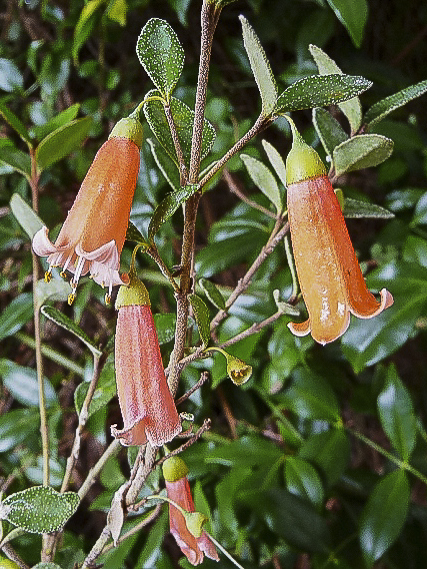 Correa ‘Autumn Blaze’ is a form of Correa pulchella selected in the wild from a population on Kangaroo Island, South Australia. It is small and compact, growing to a height of about 30 centimetres with a spread of 1.5 metres. Leaves are glossy, mid-green above and paler beneath. The orange flowers are the outstanding feature of this cultivar. 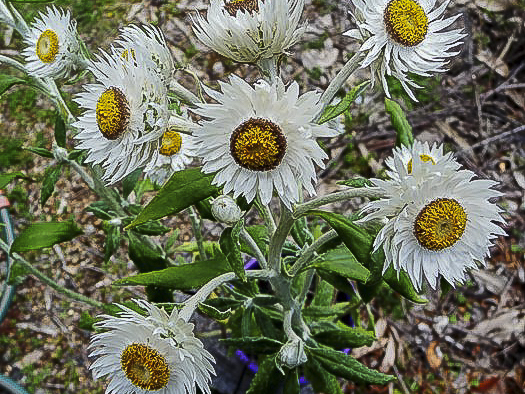 Coronidium elatum is a perennial that may reach a height of two metres. Both stems and leaves are covered with white hairs, giving plants a woolly appearance. Leaves are lanceolate and up to ten centimetres long. Papery white flower-heads up to four centimetres across appear in spring. 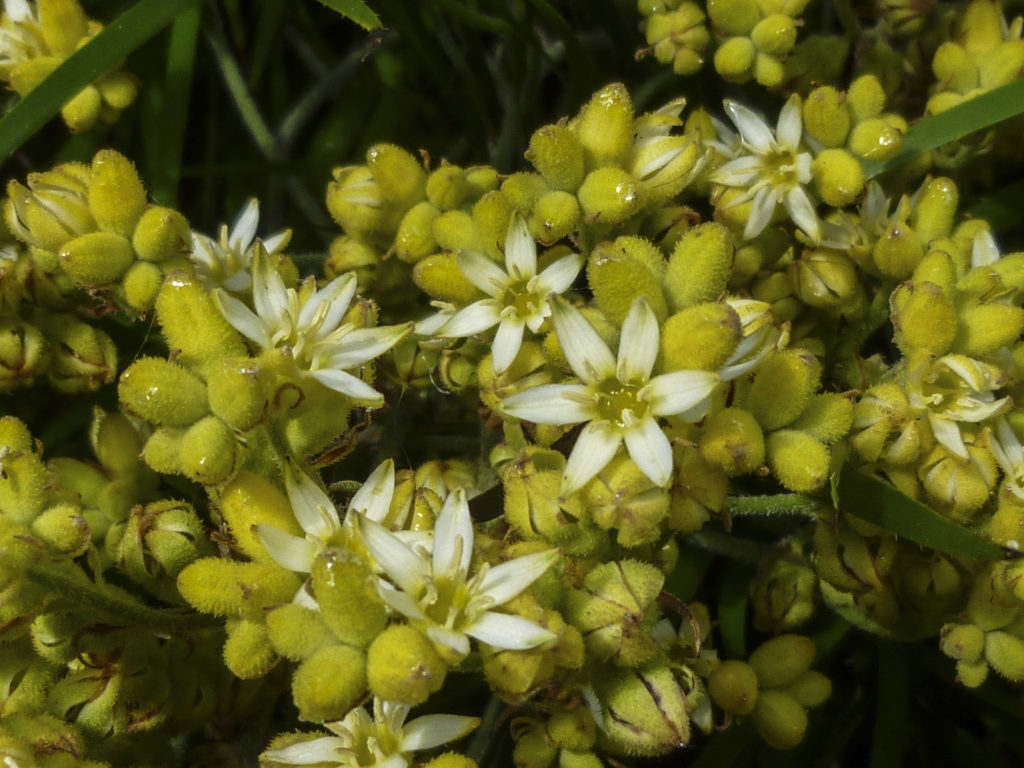 The Conostylis genus is endemic to Western Australia and is found mostly in the south west corner of that state where they generally grow in well drained sandy soil. There are some 45 species and are all perennial, tufted herbs and are closely related to the Kangaroo Paws. It is a very adaptable plant and a great ground cover. 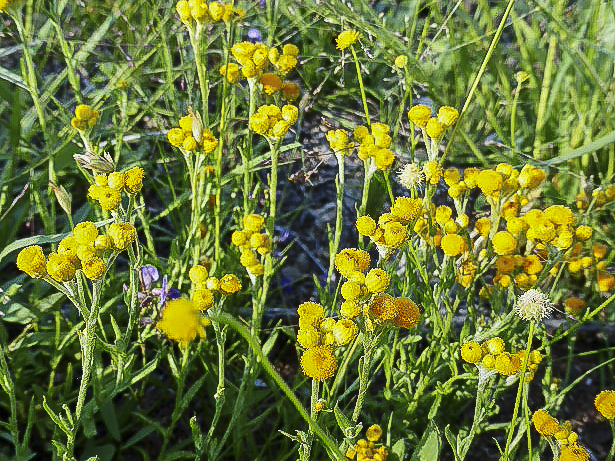 Chrysocephalum apiculatum, the Common Everlasting, is a perennial herb which is found throughout Australia in a wide range of environments. Because it has such a wide distribution there is considerable variation in height, growth habit and leaf colour. The profuse yellow flowers make it a popular groundcover. 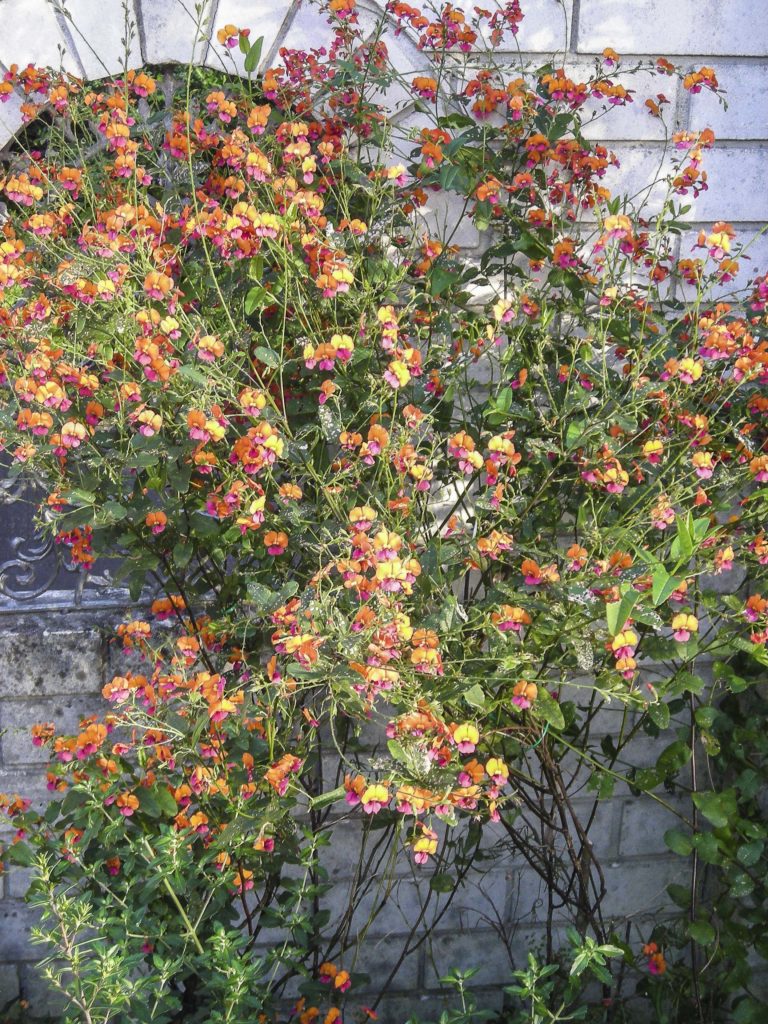 Chorizema cordatum, the Heart-leaf Flame Pea, is a native of south-western Western Australia and develops into spreading shrub reaching a height of one metre. It is relatively hardy when grown in humid areas on the east coast of Australia. Leaves are heart-shaped up to six centimetres long with a leathery texture. Sprays of orange-red, pea-shaped flowers cover plants in spring. 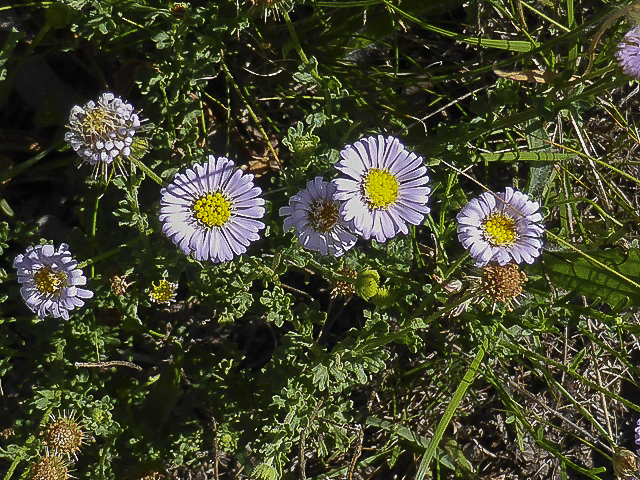 Calotis cuneifolia is a member of the Asteraceae (Daisy) family. The genus is usually known as Burr Daisies. It is a dwarf, rounded perennial, with white or lilac daisy flower heads and small wedge-shaped leaves (cuneate, hence the species name). 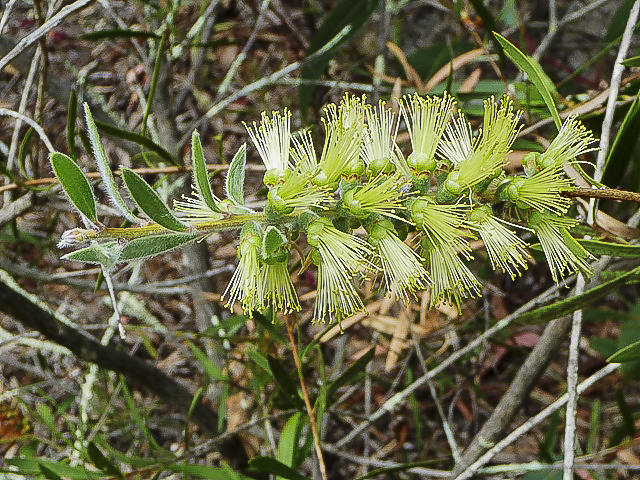 Callistemon flavovirens is a spreading shrub that can reach a height of two metres with a similar spread. New growth is soft and has a silvery appearance. Adult leaves are dark green, narrow elliptical, up to eight centimetres long and widely spaced along the branches. The greenish-yellow flower spikes are about eight centimetres long. 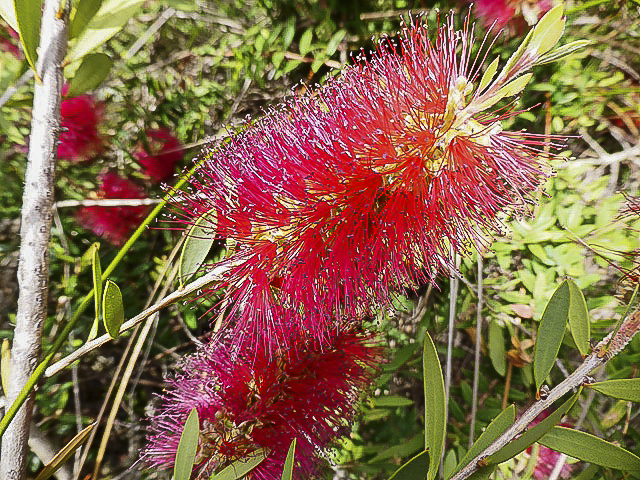 Callistemon ‘Firebrand’ is a low spreading, dense ground cover that reaches a height of 50 centimetres with a spread of over one metre. Adult leaves are stiff and shiny with oil dots while new growth is soft and pink. The brushes are a rich crimson-pink and appear in profusion from spring to autumn.

Bulbine vagans is a perennial herb reaching a height of 20 to 60 centimetres. The roots are thick; the long, shiny, succulent leaves have a channel down the middle and are up to 30 centimetres long. From spring to mid-summer plants produce many flowering stalks (or scapes), with each scape holding up to 45 bright yellow flowers. 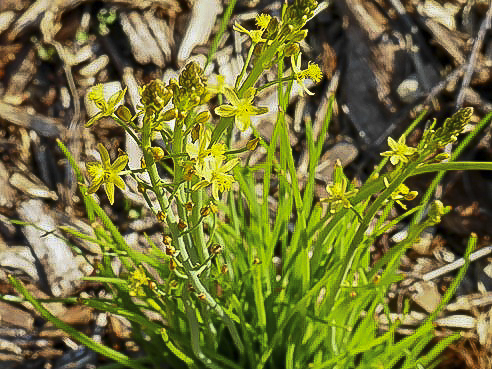 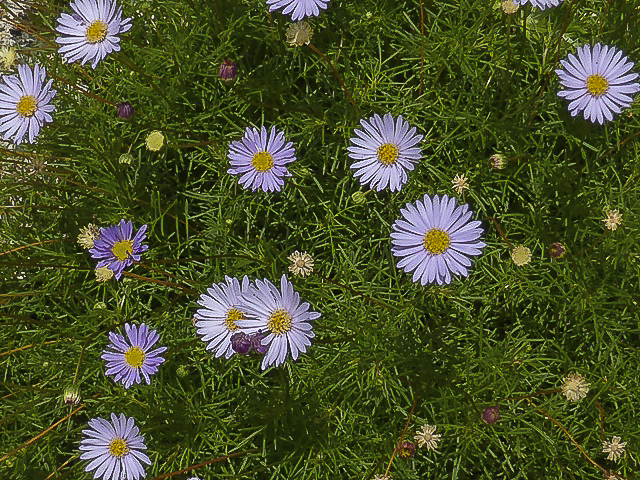 Brachyscome multifida, the Cut-leaf Daisy, is a hardy and colourful perennial. It develops into a dense, ground covering mound reaching a height of 30 centimetres with a diameter approaching a metre. Foliage is light green. In spring and summer plants are covered with mauve-pink flowers. A great groundcover or edging plant in the garden. 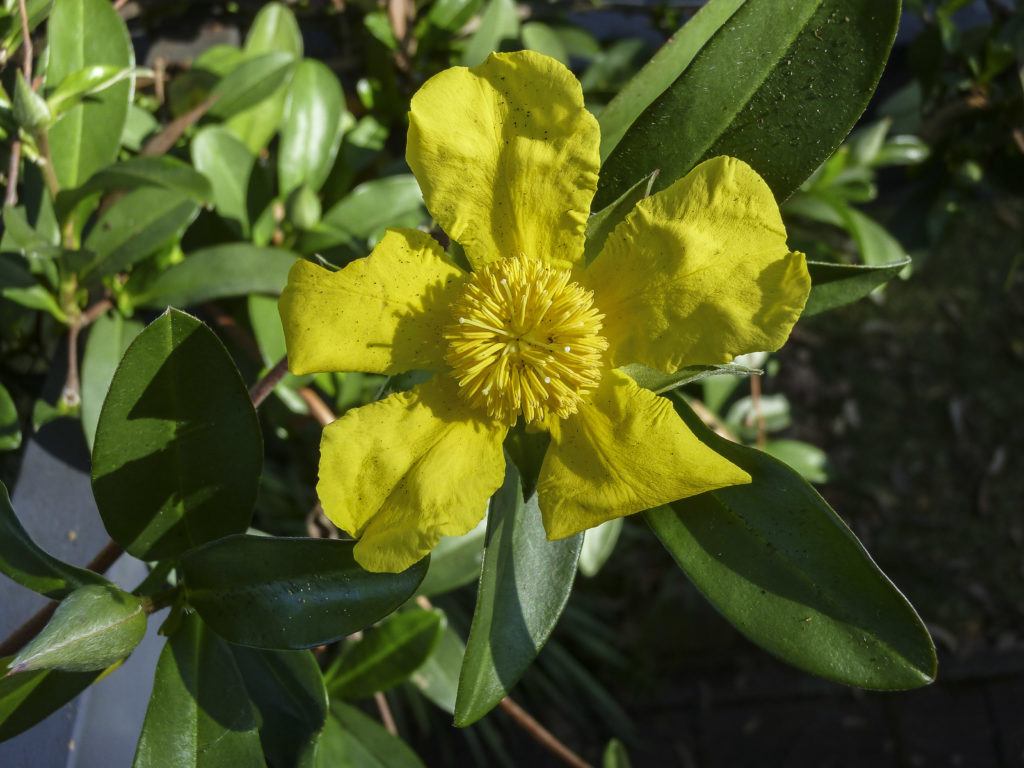 Hibbertia scandens, The Climbing Guinea Flower, as the common name indicates is a vigorous climber with stems that may reach five metres in length. Large flowers are about seven centimetres across, bright yellow and solitary. Sporadic flowering occurs throughout the year. Hibbertia scandens is an eye-catching species with its large flowers. 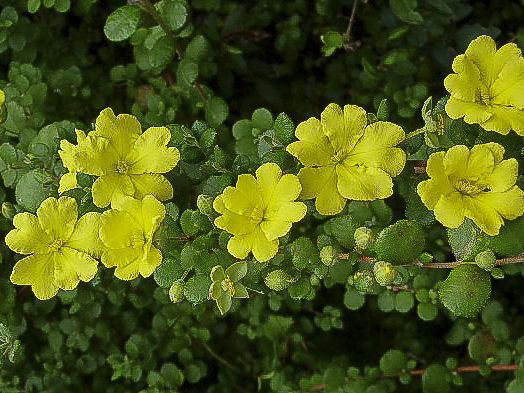 Hibbertia aspera, the Rough Guinea Flower, is usually a bushy, dwarf to medium shrub that may spread by suckers. The stems are wiry and roughened. Leaves are up to 25 millimetres long, 10 millimetres wide, elliptical, light to deep green with a rough surface (hence the common name). Yellow flowers are one centimetre across and solitary on slender stalks. 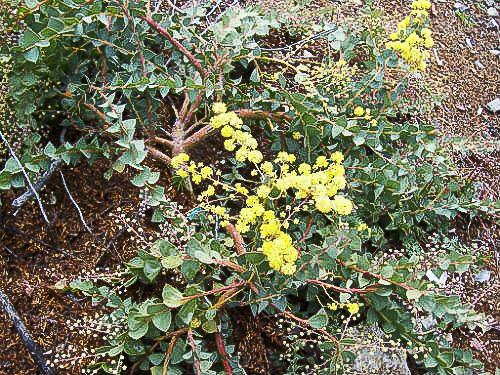 Acacia pravissima ‘Bushwalk Baby’ is a low growing form of the usually upright Acacia pravissima, the Ovens Wattle. The phyllodes are small, wedge-shaped and grey. They are arranged spirally around the stems. Yellow flowers are held in globular clusters and cover plants in spring. As the flowers fade cut off each branch behind the spent blooms. This will maintain the plant’s bushy growth habit.