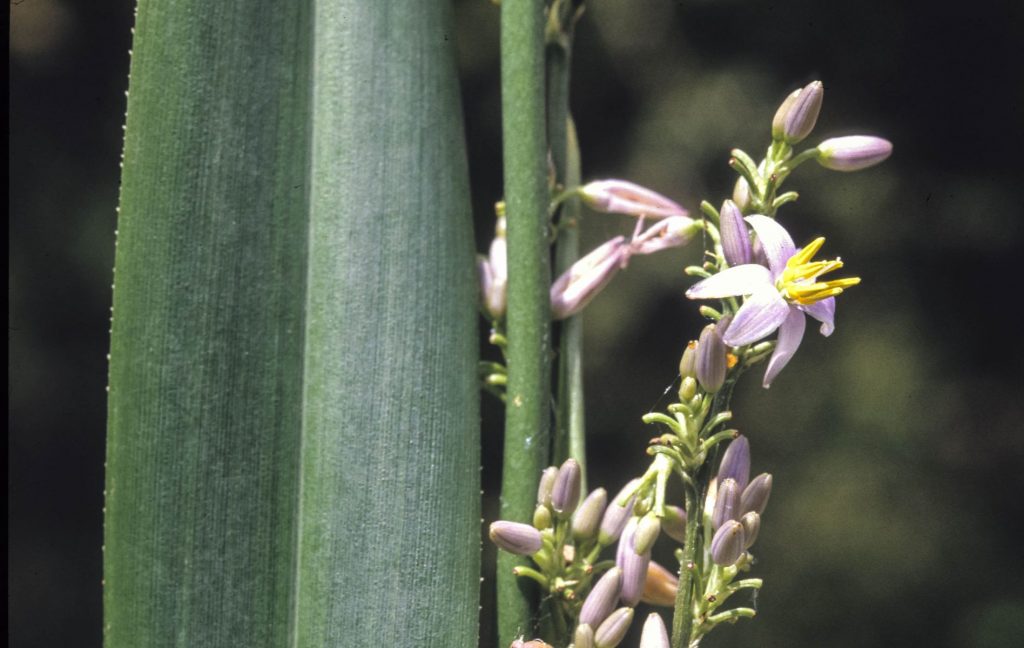 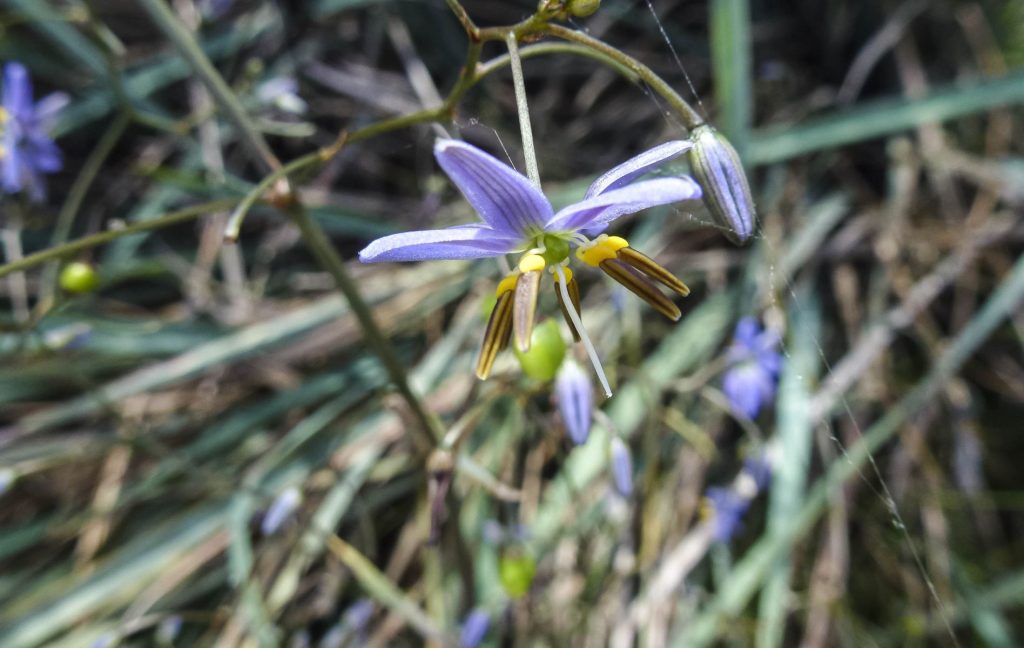 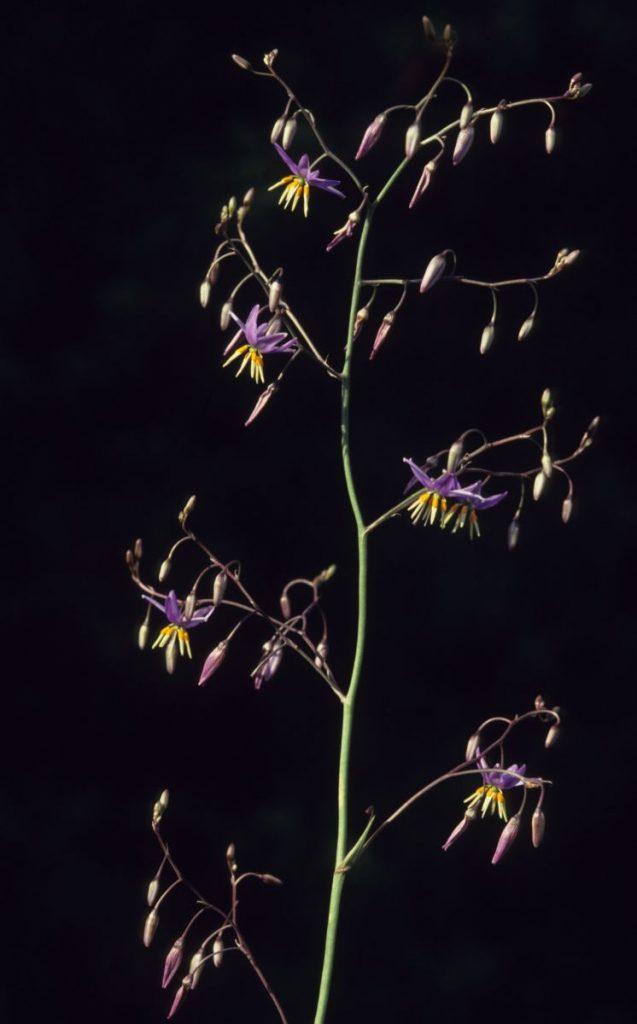 A clumping lily-herb with basal laves on compressed rhizomes to 10 cm long, with inflorescences to 1.5 metres tall. 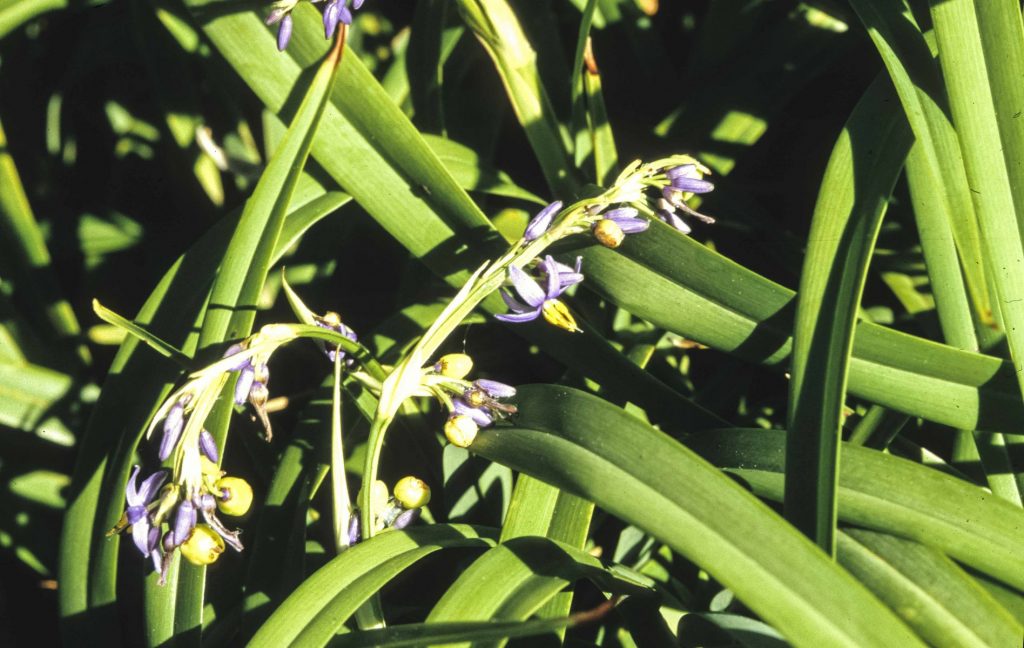 Dianella congesta is a clumping lily-herb with rhizomes to 20 cm long, forming mats, usually with inflorescences within the foliage, rising to about 1 metre tall. 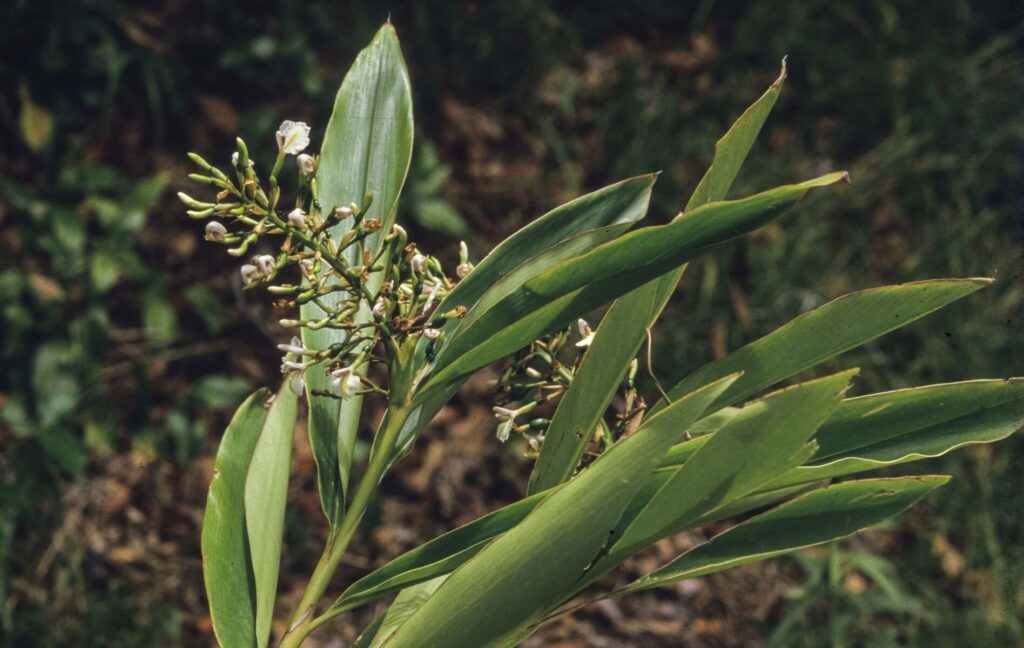 Alpinia caerulea is an understorey perennial lily-type plant (not woody) growing to 3 m high in rainforests and wet sclerophyll forests in eastern Australia. It is found north of Gosford in NSW and extends along the coast into Queensland. It is related to species such as Ginger. 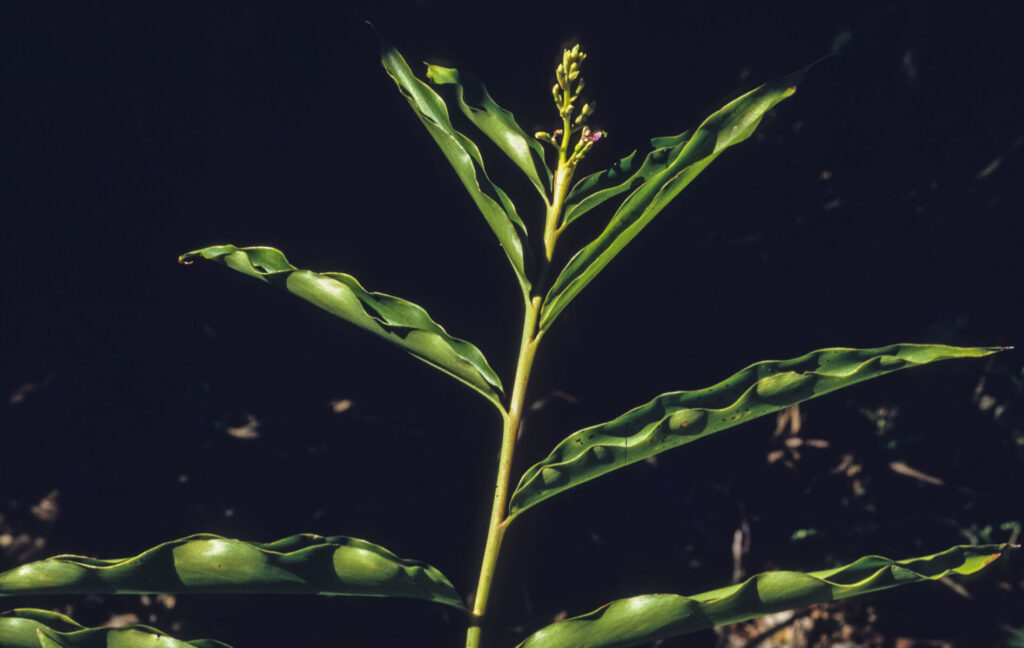 Alpinia arundelliana is an understorey perennial lily-type plant (not woody) growing to 2 m high in rainforest or wet sclerophyll forest; north from Wyong north into Queensland. It is only found in coastal areas. 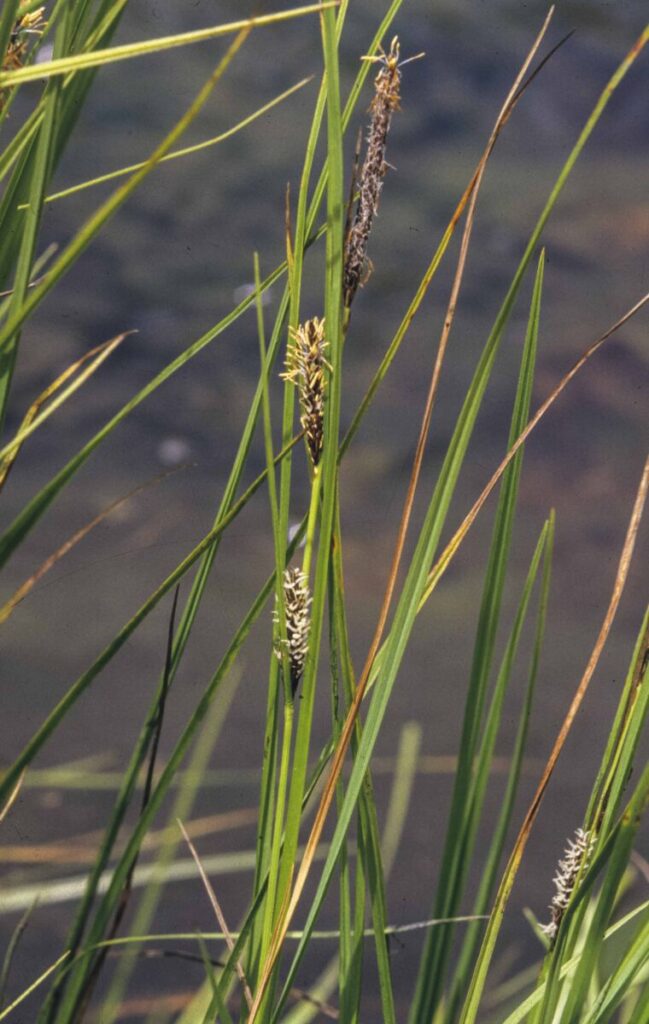 Carex gaudichaudiana is a loosely-tufted sedge to 40 cm tall with creeping rhizome. It grows in wet areas (swamps and creekbanks) from near sea level to alpine areas. 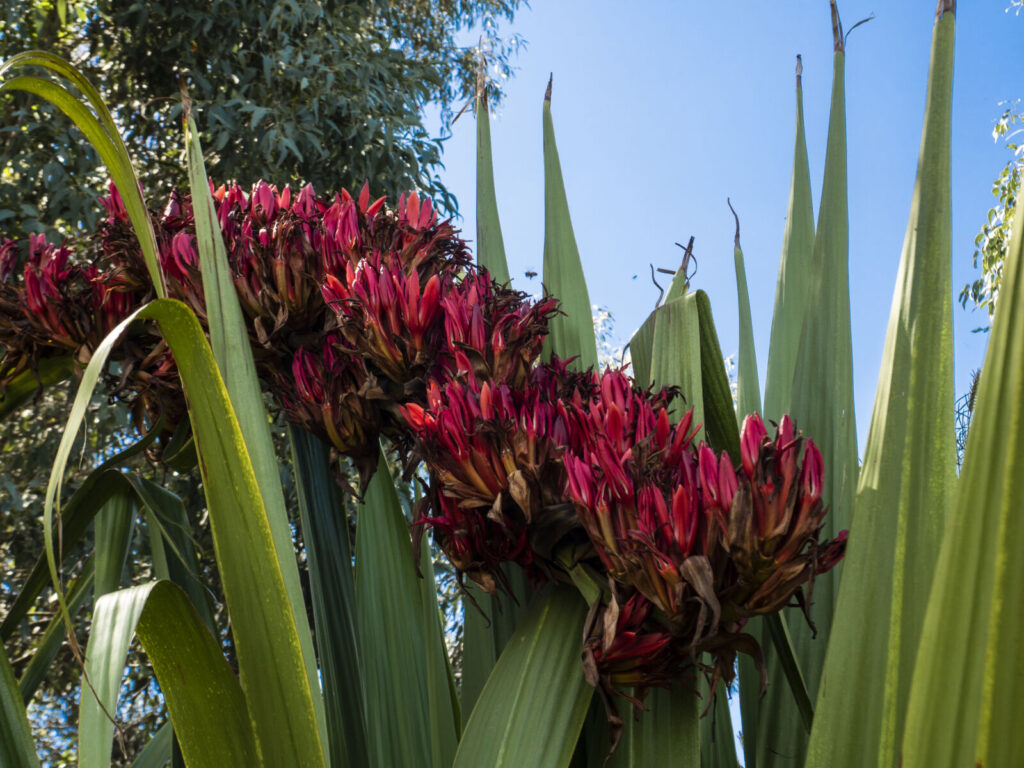 Doryanthes palmeri, the Giant Spear Lily, has long wide sword-like leaves in rosettes. These arise from ground level and produce numerous suckers to form a large dense clump. Leaves are 2 to 3 m long. It normally flowers in spring. Its flower stalk is very long (up to 4 m) and is different from Doryanthes excelsa in that the stalk droops rather than being upright and the flowers are spread further down the stem. 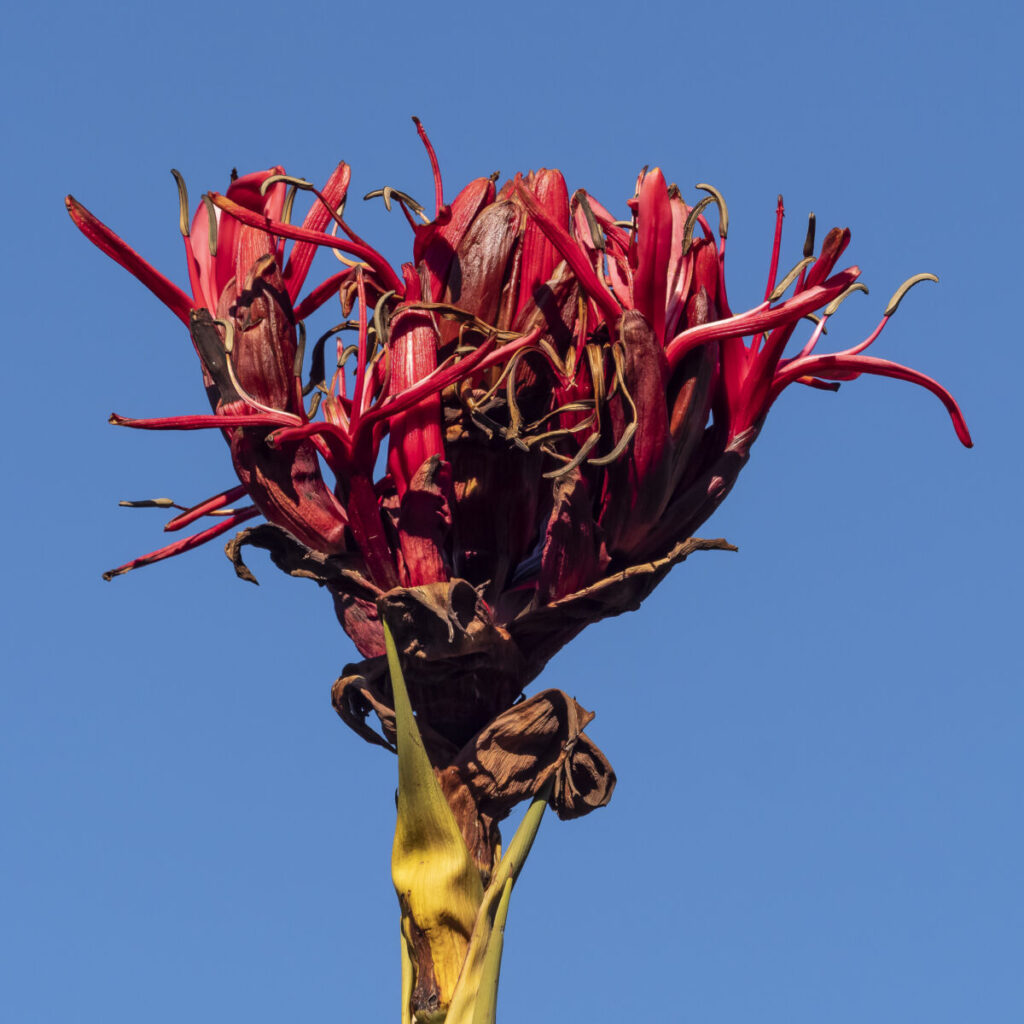 Doryanthes excelsa, the Gymea Lily, is a hardy, clumping monocot with fibrous sword-like leaves which grow up to 1.5 m long and 10 to 12 cm wide. It grows from a thickened underground stem which penetrates deep into the ground to protect against drought and fire, so does best in deep soil. 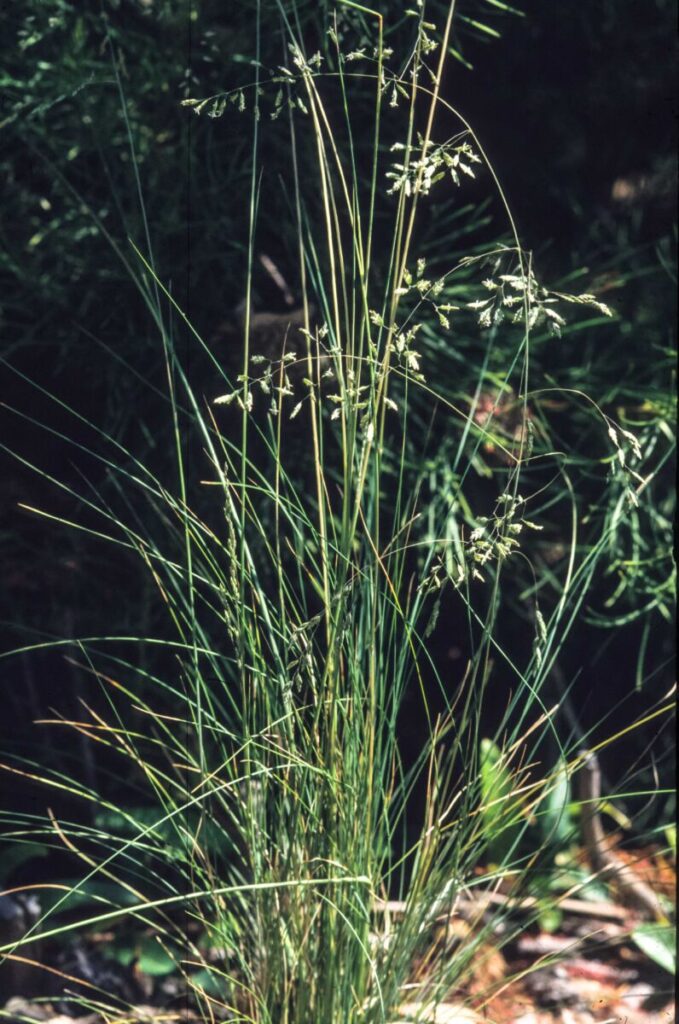 Poa sieberiana is a dense tussock grass with fine green to greyish-green leaves about 50 cm long. There is also a blue variety var. cyanophylla. The very attractive inflorescences (panicles) are about 1 metre tall, from spring to summer, with pale green to purple seed heads. A popular plant in native garden landscapes. 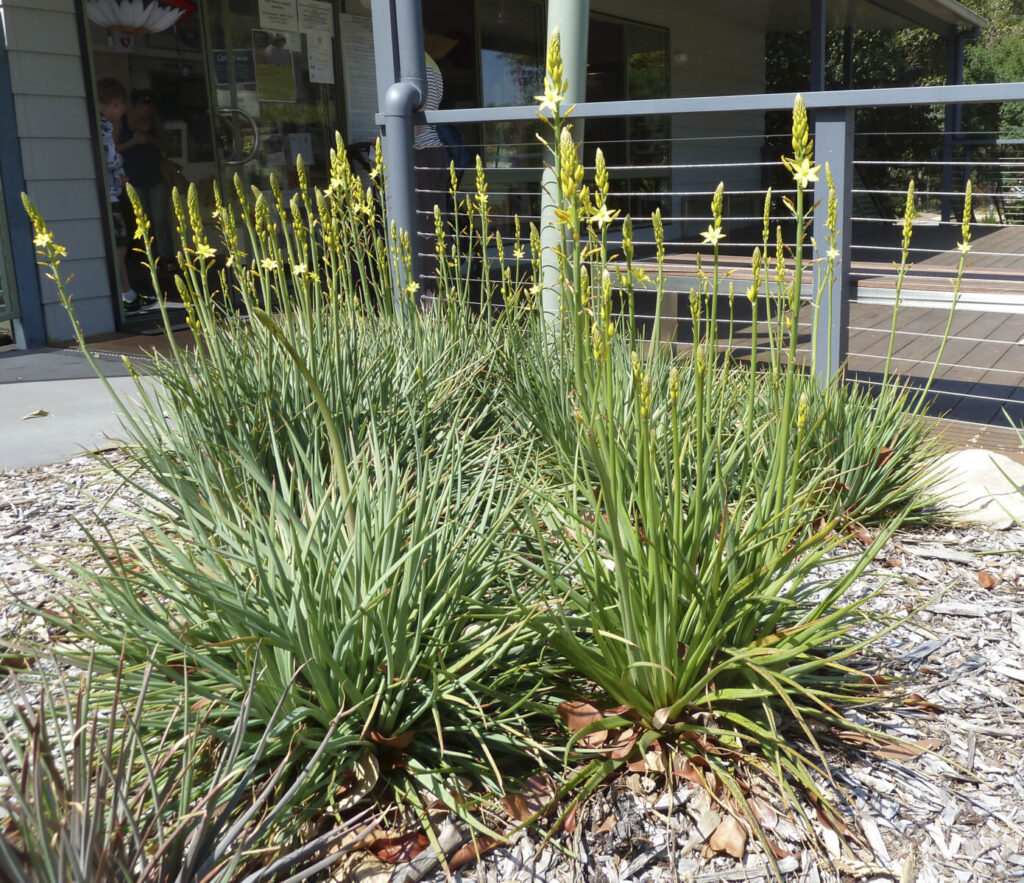 Bulbine bulbosa grows throughout temperate Australia from central Queensland to Tasmania and South Australia as well as all over NSW, usually on heavier soils. It grows in a variety of habitats including dry sclerophyll woodlands and forests as well as grasslands and rock crevices. It can be found in large numbers in cleared and regenerating open grassy areas after rain. 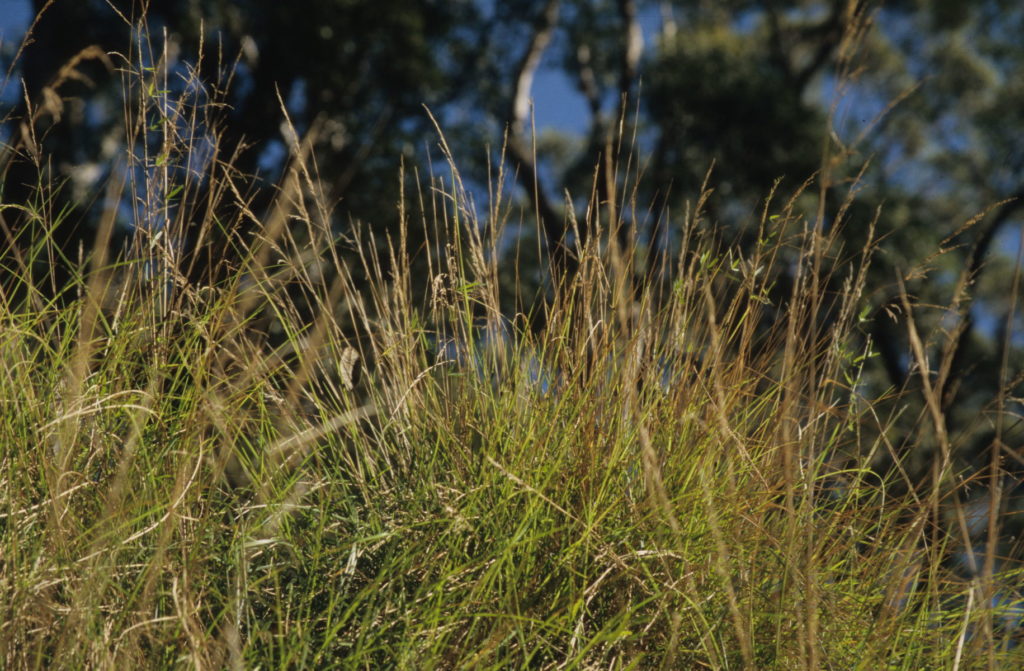 Poa labillardierei is an attractive low maintenance feature or background ornamental grass, ideal for landscaping and suitable for group plantings. Is fast growing in all types of soils with a shallow root system. Low maintenance once established. 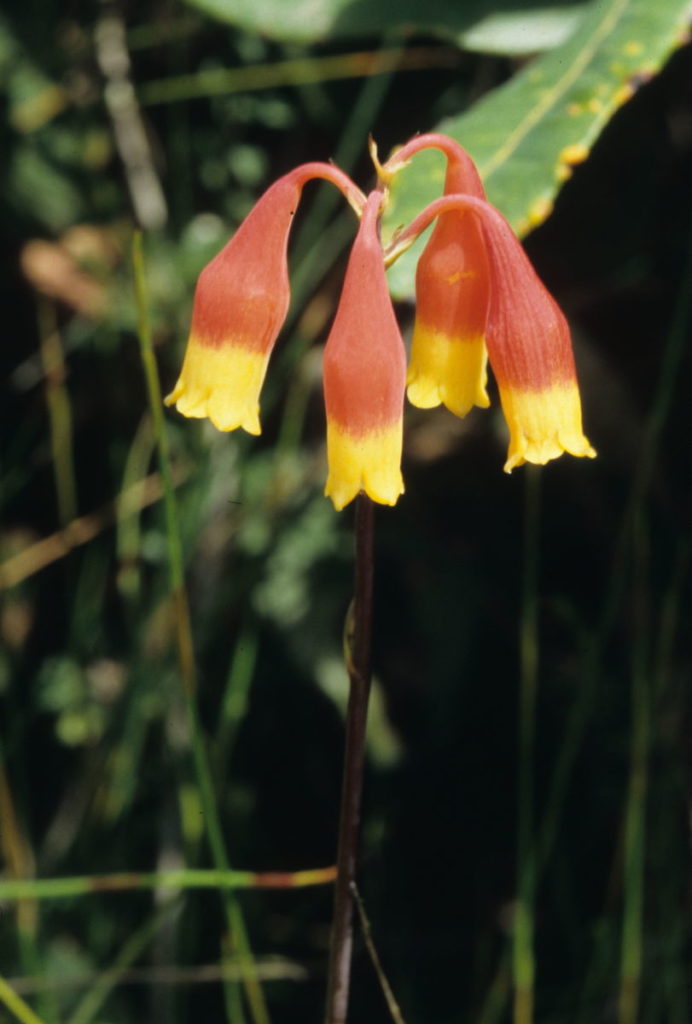 Blandfordia nobilis prefers to be grown in full sun in coastal regions and not colder, drier shady positions. It grows best where the soil is naturally deep and light (sandy) with fairly constant moisture. 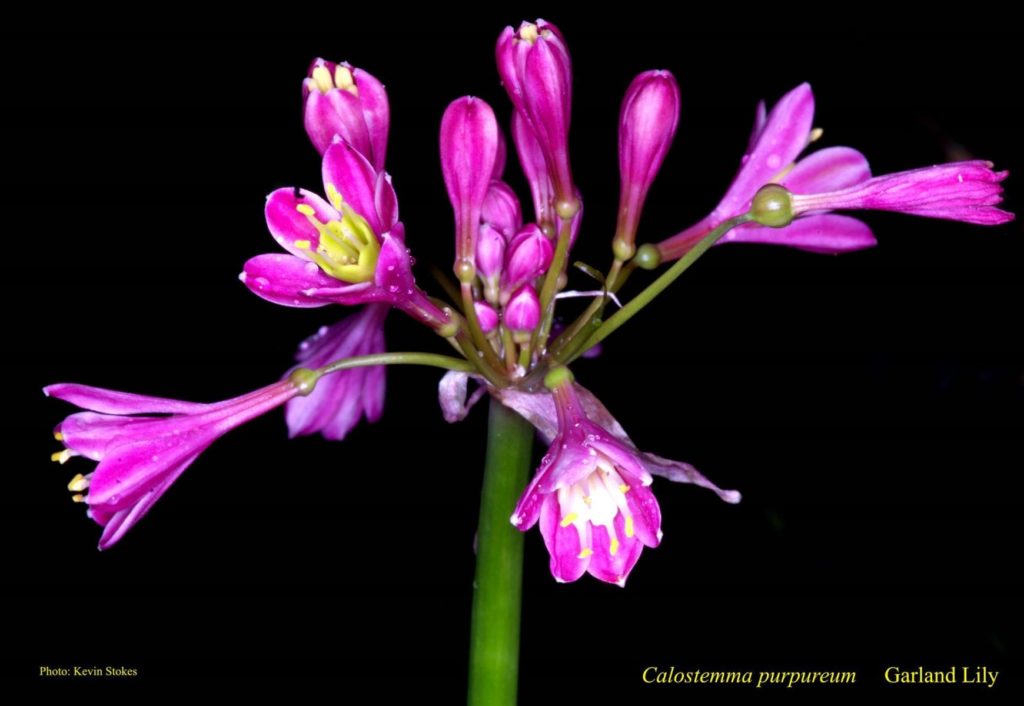 Calostemma purpureum seems to be one of those plants that gain popularity and then, for some unknown reason just stop being around, at least in the local area of Newcastle. When first starting a native garden, I recall seeing this attractive plant in other members’ gardens and also available to buy in specialist nurseries. I am pleased that I have “rediscovered” this lily and had the pleasure of many flowering heads during late summer. Commonly called Garland Lily, it belongs to the family Amaryllidaceae and is the only wholly endemic genus of that family in Australia. 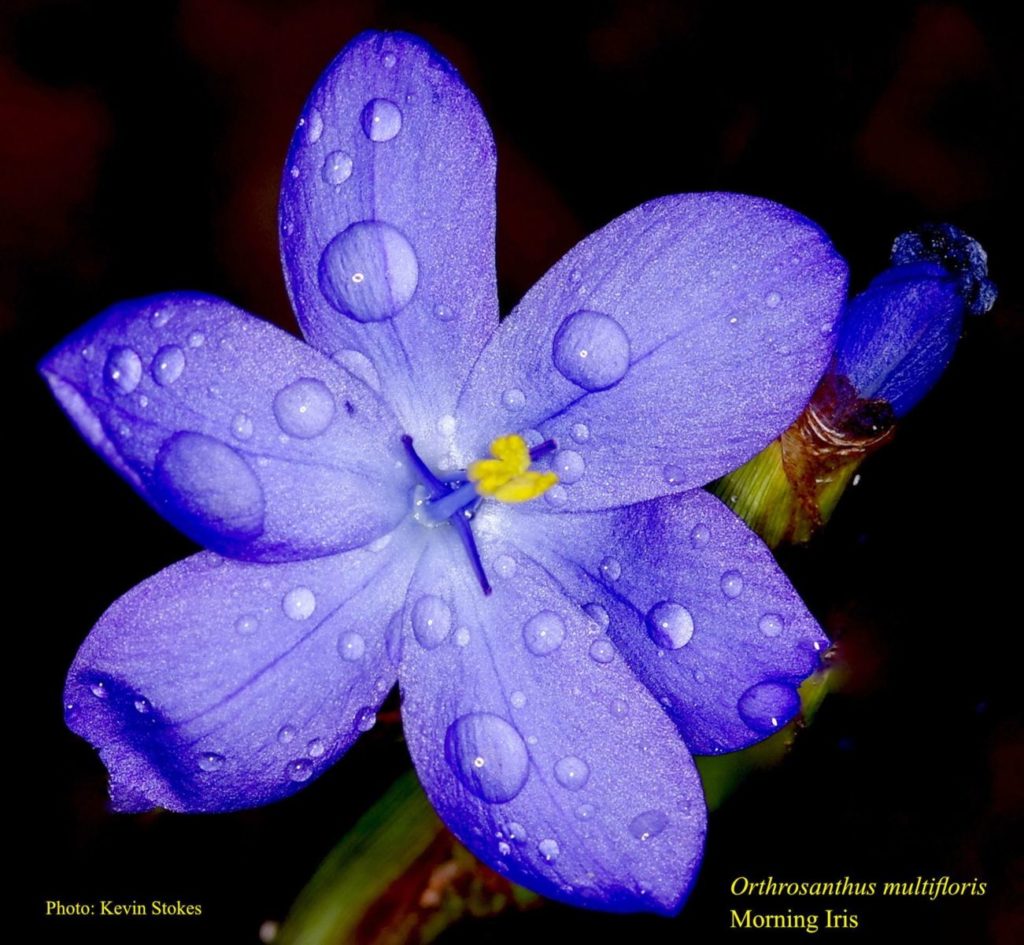 The Morning Iris is found in southern South Australia and Kangaroo Island. It also occurs in Victoria and Western Australia. It is a very hardy and attractive plant for informal rockeries or massed displays. The plants somewhat resemble Dianella sp. in form but not in flower.

Themeda triandra is a tufted perennial reaching a height of 1.5 metres with a spread of 0.5 metres. Leaves are 10-50 cm long and 2-5 mm wide, green to grey and dry to an orange-brown in summer. The flowering period is from December to February. During this time plants produce large, distinctive, red-brown spikelets carried on branched stems. Spikelets have black awns (see image) that are retained by the seeds when shed. The spikelets make this perhaps the easiest of our native grasses to identify. 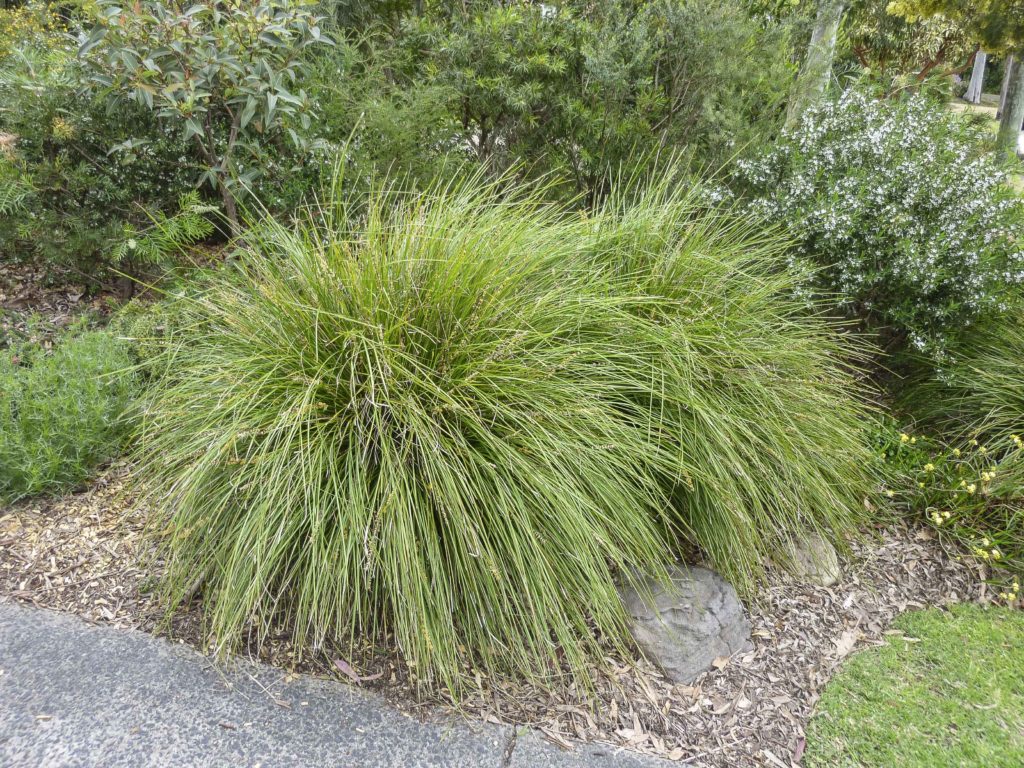 I have been growing Lomandra ‘Tanika’ in my garden in the northern Sydney suburb of Westleigh for many years. It is an improved compact fine leaf form of the popular and widely grown Lomandra longifolia and you can classify the plant as a ‘strappy leaf’ plant. My plants are growing in a thin layer of topsoil over a clay sub soil and receive little additional watering once they were established. 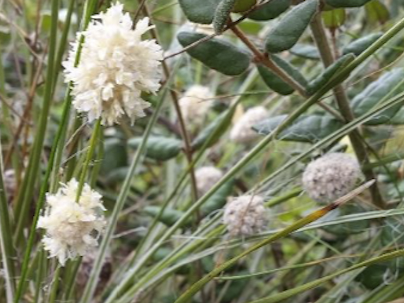 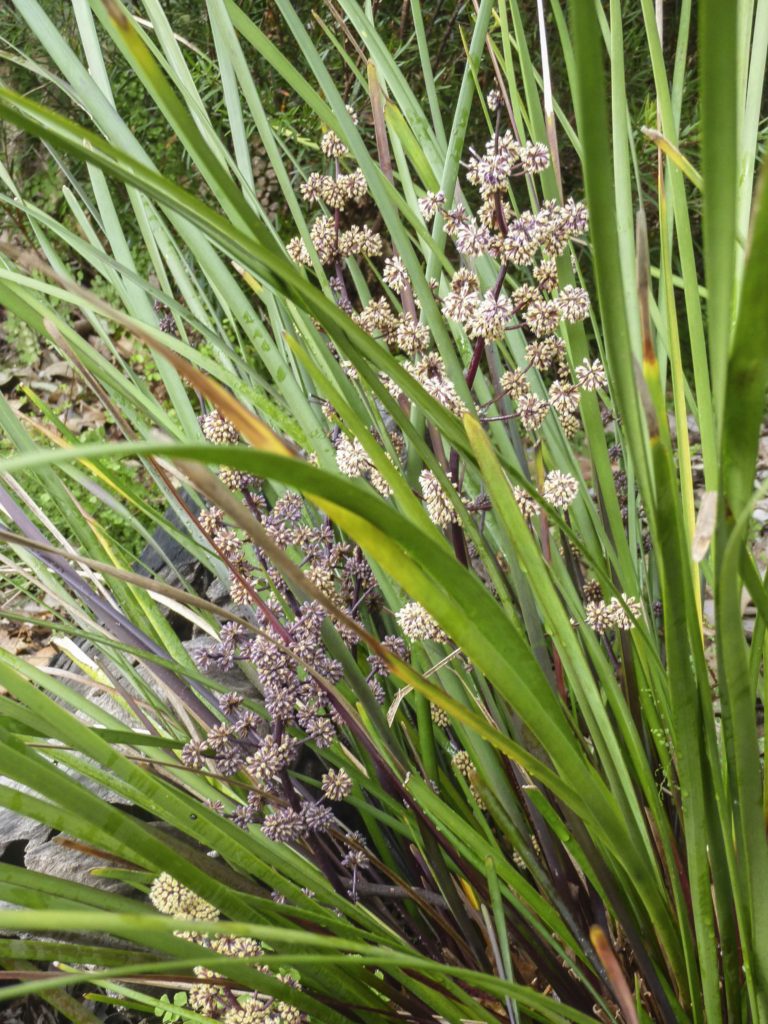 Lomandra multiflora ssp. multiflora is found in Northern Territory, Queensland, New South Wales, Victoria and South Australia and also in Papua New Guinea. I have been growing Lomandra multiflora in my garden in the northern Sydney suburb of Westleigh for many years. My plant is growing in a thin layer of topsoil over a clay sub soil and receive little additional watering once they were established 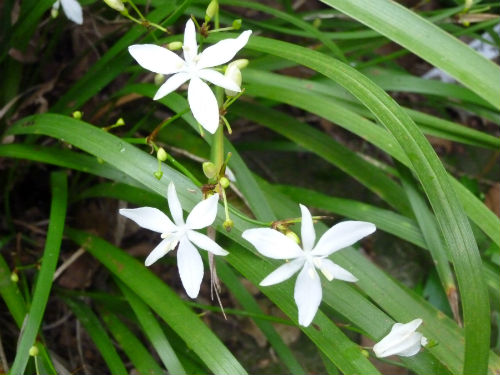 Libertia paniculata is widespread in rainforest and wet open forest on coast and adjacent ranges from south-east Queensland to eastern Victoria. The other Australian species is Libertia pulchella. They are both perennial herbs with grass-like leaves arising from an underground rhizome. 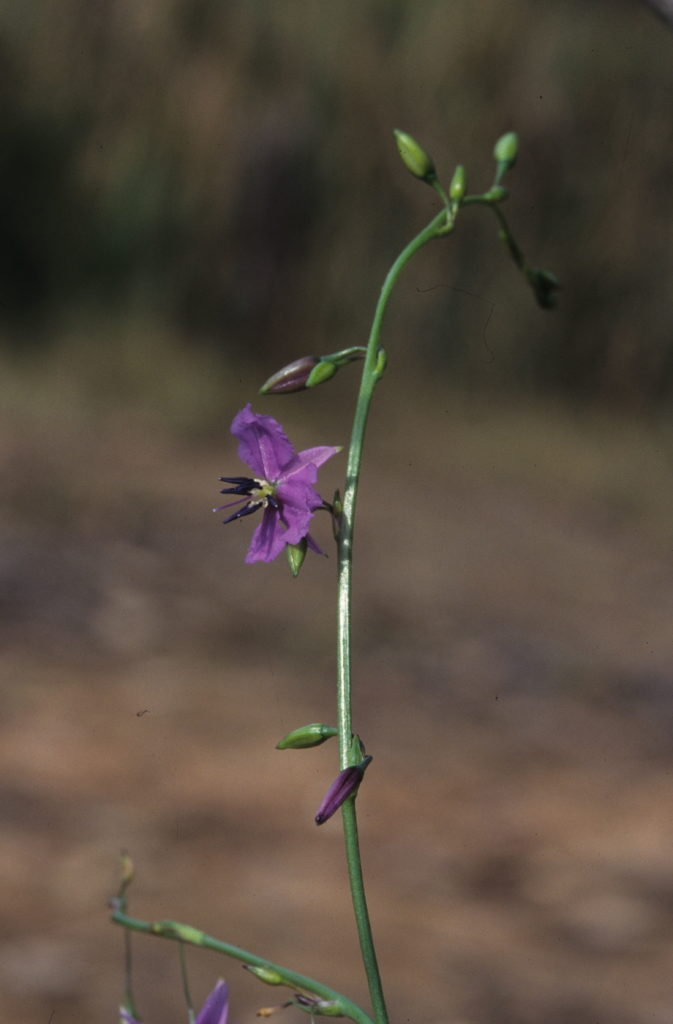 Dichopogon fimbriatus, the Nodding Chocolate Lily, is an erect herb reaching a height of 1 metre with fibrous roots terminating in a tuber. The linear leaves are up to 35 centimetres long and grass-like in appearance. In spring and summer each plant carries a flower spike carrying about 12 large, blue, six-petalled flowers. 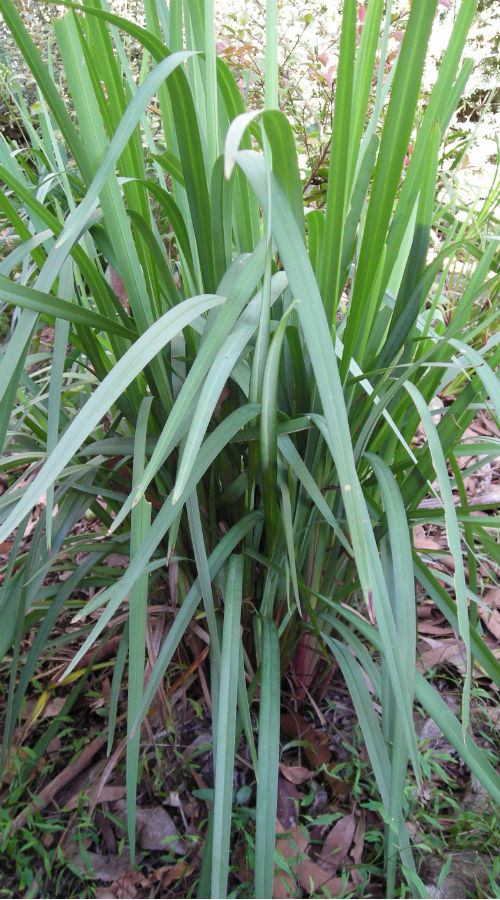 Dianella caerulea is an attractive upright plant with flax-like leaves to 60 cms high. Flowers are blue with yellow anthers and are borne on spikes to one metre high and are followed by globular bright blue-purple fruit. It grows from coast to the mountains along Eastern Australia. This species has many named varieties and this article is about ‘John 316’ King Alfred. Other varieties are ‘Cassa Blue’ and ‘Little Jess’ to name a few. 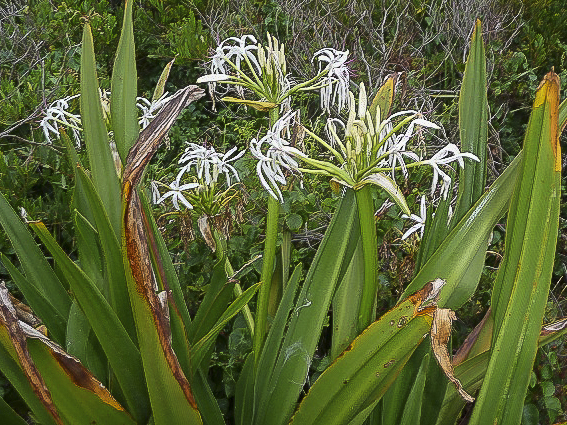 Crinum pedunculatum is a member of the Amaryllidaceae family in company with the exotic Narcissus and Nerine. The accepted common names are Swamp or River Lily. Crinum pedunculatus grows in colonies along tidal areas and streams. The species is evergreen, hardy and resists frost.