In November last year, the Southern Highlands APS group enjoyed an informative and passionately delivered presentation by John Creighton, AKA Wombat Man, who talked to them about the important work carried out by volunteer carers at Wombat Care Bundanoon. This article first appeared in the Southern Highlands Group Newsletter January 2019 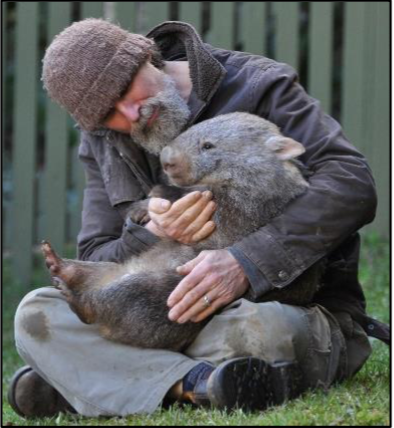 Wombat Care Bundanoon is an independent, self-funded volunteer group of dedicated carers focused on wildlife in general and wombats in particular. They are licensed to treat mange, which is the cause of the protracted and extremely painful deaths of many wombats, and work with the Wombat Protection Society Australia to deliver best practice care for the wombats living in our local area.

They are also active in area schools, mainly Bundanoon Primary School, in providing education and awareness about wombats and local wildlife issues.

The wombats in the local area are from the family Vombatus ursinus, from the latin “ursus”, meaning “bear”. They are known as the Common Wombat or Bare-nosed Wombat. The Southern Hairy-nosed and the Northern Hairy-nosed Wombats are from a different family, Lasiorhinus latifrons, and are not found in our area.

Unfortunately habitat loss, competition for food from livestock and feral animals, shooting, poisoning, bull-dozing of burrows, road deaths and mange present huge challenges for the Common Wombat. The two most pressing and obvious concerns are roadkill and mange.

We have all seen on the side of the road wombats who are injured or killed by cars. Often these animals have a viable “pinki” or a joey in the pouch. Volunteers from Wombat Care rescue these babies and raise them where possible, preparing them for a soft, supported release back into the area from whence they came. The body of the parent wombat is tagged with paint to alert other rescuers that the pouch has been checked and the baby removed if applicable.

The raising and rehabilitation of wombats in captivity must be respectful of the need to produce resilient animals which are able to survive in the wild. Keeping them inside and feeding them on human food beyond the 5kg mark is setting them up for failure.

The raising and rehabilitation of wombats in captivity must be respectful of the need to produce resilient animals which are able to survive in the wild. Keeping them inside and feeding them on human food beyond the 5kg mark is setting them up for failure. 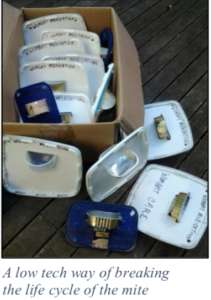 It generally takes about two years from pouch to release pen. During this time the wombats are affectionate towards their own humans, are gentle and connect with each other and are sometimes buddied up BUT they have special needs and truly do not make good pets! When they are ready to go they become more aggressive as if asking for release. In our area it is becoming harder to find places where they can be released safely away from people and cars.

Mange is a form of animal scabies caused by mite infestation. Introduced by Europeans and carried to the wombats by foxes, it is a major threat to wombat health. It causes incessant and injurious scratching by the animal creating painful lesions which become infected and eventually prove fatal. The infected animal displays “accordion fur”, crusty ears and scabs in the eyes.

There is, however, a cure which works without the need to capture the wombat. The idea is to break the life cycle of the mite. A flap is made using the lid of an ice cream container which is hung with string over the entrance of the burrow. The medicinal dose is in a can attached to the flap and as the wombat leaves the burrow the treatment dose upends onto the wombat’s back. Ingenious! Treatment lasts 15-20 days. Every 5 days the medicine needs to be replaced. Mange treatment kits are available, among other things, on the Rocklily Wombats website www.rocklilywombats.com and there is a new single dose available or close.Now for some interesting facts. Did you know that wombats: 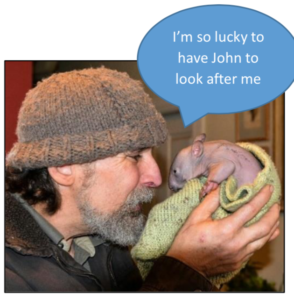 “Wombats are essentially, but not exclusively, solitary animals. Their simple grazing way of life might suggest that they do not require a particularly high intelligence. It is therefore of interest that the cerebral hemispheres of the Common Wombat are proportionately larger than any other marsupial and that those of his relative, the koala, are so poorly developed that they do not meet in the mid- line.” **

Not so common, really, eh?

Dianna and Warwick at www.rocklilywombats.com

Follow up to John’s talk: Response from attendees was very supportive, and a motion from the floor to provide a donation for the work that John and Wombat Care Bundanoon do was heartily endorsed. A cheque from APS Southern Highlands was presented to him at the Xmas lunch.