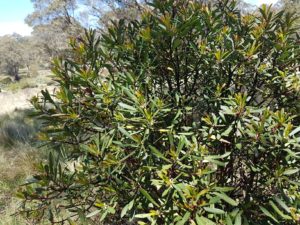 This article was contributed by Andrew Pengelly of the Hunter Valley Group and appeared in their newsletter, Gumleaves.

As a way of escaping extreme December heat, as well as to participate in a plant collecting trip for the Hunter Region Botanic Gardens, we headed up to Barrington Tops National Park, observing the change in temp from 35C in the valley to 26C an hour later, at an elevation above 1400m. The plan was to camp the night at Polblue camping area, then meet our collecting colleagues there in the morning.

Along with the camping and picnic area, Polblue has a significant peat bog, surrounded by sub-alpine flora. This area is not only of great ecological significance, it also harbours a number of rare and threatened plants, including two species of mountain pepper, Tasmannia purpurescens and T. glaucifolia (fragrant pepperbush) – see above. 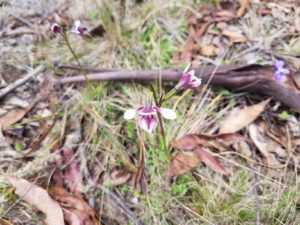 Around the campsite we found an abundance of flowering veined doubletail orchids (Diuris venosa), another threatened species. (see left)

There is a good walking track around the peat bog, however it is a surprise to find large piles of horse manure along the track. I took a short stroll into the peat bog and found plenty of large hoof prints deeply embedded in the soft ground. Our guide Bill Dowling indicated there are around 100 feral horses in the area, certainly one of the threats to this world heritage wilderness site.

As we progressed slowly along the track at botanist speed, another major threat is ever-present, the introduced Scotch broom (Cytisus scoparius), a declared noxious weed. While it is a reasonably attractive plant with its’ buttercup yellow pea flowers and bright green pods, this species looms as the greatest threat to the stability of this fragile wilderness.

After a lunch break we drove a little way north to another section of Polblue creek, known habitat for the rare silver tea tree (Leptospermum argenteum) and two threatened species of plantain (Plantago spp.) 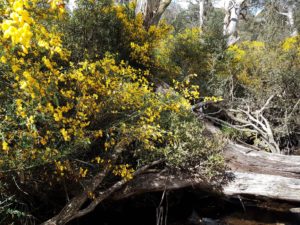 We disturbed a wild pig, another environmental threat to the region, and we did find some silver tea tree on the creek bank although it was visibly in the process of being squeezed out by the broom. A few specimens of T. glaucifolia on the edge of the creek were also being overwhelmed by the broom. See image to right with T. glaucifolia is being overwhelmed by Scotch broom (see right).

The continuing spread of this invasive weed is a massive problem. At Polblue hundreds of seedlings can be seen emerging in places both inside and outside of the walking trail, making a mockery of attempts at controlling this species with herbicide. In fact, I learned that the spray program was put on hold after it was discovered that around 100 T. glaucifola specimens were accidentally poisoned. 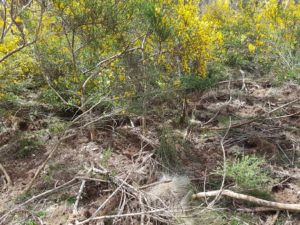 I do have major concerns about the use of herbicide on such a large scale, as we know that much of the residue will end up in the waterways, and ultimately the Hunter River. Physical control by digging out the plants could work in theory, but the scale of the problem means hundreds of workers would be required for an extended period, an idea that is clearly impracticable. See image to left – Cytisus dead and alive 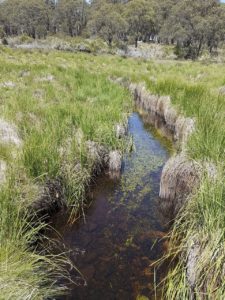 Late in the day as we headed back down into the valley and the heat I had very mixed feelings. On the one hand, it is a beautiful area with so much more to explore and a selection of rare and interesting plant species. On the other hand I felt a sense of despair – it is hard to imagine that within the foreseeable future the peat bog won’t be overrun with Scotch broom, just as the nearby creeks and woodlands are already.