Jennifer Farrer from APS Parramatta Hills Group shares the life of Olive Pink, 1884–1975, from a book celebrating her life. 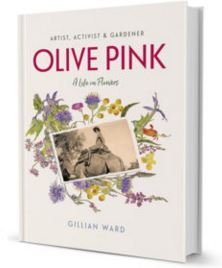 Perhaps you have visited the Olive Pink Botanic Gardens in Alice Springs. It is certainly one of the best places to see Central Australian flora and as a bonus there is an excellent café. So who was Olive Pink?

Olive Pink was born in Hobart in 1884 and learned to love the Australian bush and its unique flora on rambles with her father on Mt Wellington. Her life was influenced by the Quaker philosophy of social justice she encountered at the private Girls High School in Hobart, run by a Quaker family. This influence can be seen in her later activism on behalf of Aboriginal people, which made her an unpopular figure in government circles. It was easy for people to dismiss her as an eccentric old woman.

Olive first learned to paint at the Girls High School. Her teacher was Mary Augusta Walker, a successful painter who had been trained in London and Paris and believed that to achieve success as an artist, a woman had to make art her first priority before social life and family. Olive’s teachers were role models of strong, creative and independent women.

As a young woman in Hobart Olive began to pursue her lifelong passions of art, Aboriginal welfare and plant conservation.

Olive continued her art studies in Hobart but after her father’s death moved to Perth where she gave art lessons. She met the love of her life who was sadly killed at Gallipoli. Later in 1915 she moved to Sydney where she continued to teach art. She completed a Town Planning Diploma at the University of Sydney and was employed in various government jobs which gave her financial security but she did not enjoy the work. She attended evening classes at the Julian Ashton School. She began to design cards and calendars depicting flowers and birds which she continued to do for the rest of her life.

Olive’s connections in Sydney, including the Association for the Protection of Native Races, inspired her to travel to the outback. She met Daisy Bates and visited her camp on the edge of the Nullarbor Plain. Olive spent her annual holidays there in 1926 sketching, painting, recording Aboriginal words and observing Aboriginal customs. Daisy Bates invited her back the following year.

In 1930 Olive took six months leave from her job at the Railways and embarked on a sketching tour from Port Augusta to Darwin, of the flora of Central Australia as well as further investigation into how Aboriginal people lived. These experiences were life changing for Olive. She learned the desert survival skills which gave her the confidence to live in the most difficult conditions.

Back in Sydney she attended anthropology lectures at the University of Sydney and submitted a thesis on the ritual ceremonies she had observed in Central Australia. Qualified as an anthropologist she resigned her public service job and applied for grants to continue her anthropological research. She wrote several research papers for conferences and publication, all done in very primitive conditions and on a “microscopic” income. She also relied on friends and family support and in 1937 returned to Hobart for a year to write up her research.

A small donation from a Quaker benefactor, which included money to purchase a truck, and a small annual allowance from the Sheet Metal Workers Union allowed her to return to Alice Springs in 1940. In 1942 she set off for Pirdi Pirdi near Thompsons Rockhole in the Tanami Desert. She remained there until early 1946 when severe drought, extreme heat and lack of food forced her to return to Alice Springs.

After WWII she moved into an ex-army sleeping hut made of unlined corrugated iron. She lived in half of the hut and the other half was used to house her collection of Aboriginal artefacts and her paintings. She opened this collection to visitors for a small fee. Her other source of income was the sale of plants and flowers and her hand painted cards and calendars. She also cleaned the Alice Springs courtroom. This gave her an income, and also enabled her to observe how fairly or unfairly Aboriginal people were treated in the white legal system. Her efforts were not popular with the staff at the courthouse or the police.

Her life in Alice Springs took a dramatic turn when she was evicted from her beloved Home Hut. She applied for a licence to move to a vacant quarter acre block on the other side of the Todd River. In late 1956 she pitched her tent at this beautiful site. In 1958 after protracted negotiations her hut was re-erected nearby.

Wherever Olive Pink lived she created a garden. In her last home she created a garden that has been named after her – the Olive Pink Botanic Garden in Alice Springs. She persuaded the Northern Territory Government to create a flora reserve to conserve the native vegetation, to plant arid land plants and to protect the beautiful location from development. Her desire to protect endangered species and to preserve the local flora was ahead of its time when the Australian Arid Regions Native Flora Reserve was gazetted in September 1956.

Until 1961 Olive Pink worked alone. Aboriginal gardeners were employed to assist her after she was assured they would be paid the basic wage. For 12 years her assistant was a Warlpiri man, Johnny Tabijinba Yannarilyi , whose knowledge of local plants and growing conditions was invaluable.

Olive died in July 1975 but her garden lives on as a place for the peaceful contemplation of nature and education about local plants.

Some 200 of Olive’s botanical paintings and sketches are held in the Library of the University of Tasmania. This biography of Olive Pink has been written by Gillian Ward who curated an exhibition of these paintings at the University in 2004. Almost half of the book comprises a selection of these flower paintings which have been botanically identified and paired with a photograph of the plant. The book is also generously illustrated with photos from Olive Pink’s life and times.