APS NSW is a member of the Nature Conservation Council and Margery is our representative. Here is her update from the Annual Conference held 31 October 2020 via Zoom.

The principal activities of NCC during the year were to work for the conservation of nature, the protection of the environment and the attainment of an ecologically sustainable society. 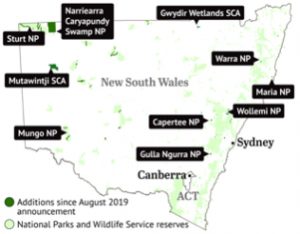 Thousands of hectares of forests are now endangered by mining, logging and land clearing, and NSW has more than 1,000 threatened species.

The new national parks land includes the Narriearra Caryapundy Swamp National Park of 153,682 hectares, on land that was purchased in June, as well as an addition to the Sturt National Park of 17,479 hectares.

The expansion outlined above also includes additions to the Capertee National Park, the Maria National Park and Mungo National Park, as well as reclaiming Travelling Stock Reserves in the State’s far-northwest that are already managed by the National Parks and Wildlife Service.

This is good news; let’s hope he remains as Environment Minister in the State.

More good news is the NSW government’s policy of aiming for net zero greenhouse gas emissions by 2050 and support for renewable energy projects in spite of the Federal government’s refusal to make such commitments.

Chair of the NSW Parliamentary Inquiry into Koala Populations and their Habitat, Greens MP Cate Faehrmann, said that the government must do much more to protect koala habitat from logging, development and land clearing if koalas are going to be saved from extinction.

Cate noted that koala populations in NSW were already in a desperate state before the fires but now they are on the verge of extinction. Without major intervention the koala will almost certainly go extinct.

Furthermore, the Pilliga Forest in the state’s northwest and the Gardens of Stone near Lithgow are areas of outstanding conservation value threatened by gas and coal projects. These areas should be out of bounds, especially for fossil fuel projects that are feeding climate change and threatening our livelihoods and lifestyles.

NCC will undertake action, as described in the motions, on:

Webinars are available that you can attend to learn more: ‘Cocktails, Controversy and Conservation’ usually occur fortnightly. Experts on a particular conservation topic present their findings. For example, on 15 January 2021, floodplain graziers, watching their equity move north, discussed the Darling Baaka River. The legal priority for water uses i.e. first environment, small farmers, then irrigators, is reversed in practice. The minutes of the conference also provide excellent background to the motions.