Features of the estuary

The Tuggerah Lakes Estuary system is a system of three inter-connected coastal lagoons, mostly separated from the sea. These lagoons are called Lake Munmorah, Budgewoi Lake and Tuggerah Lake and cover an area of approximately 80 square kilometres. Although they are called lakes, a lagoon differs from a lake in that it’s a shallow body of water close to the sea with a small inlet permitting tidal currents in and out.

Estuaries are formed when bodies of water, including rivers, lagoons and creeks meet the sea causing fresh and salt water to mix. This is known as brackish water. They are a complex and unique habitat for many animal and plant species that have adapted to the brackish water.

The catchment area of the three lagoons is massive, stretching from Bateau Bay to Ourimbah and west to the Watagan Mountains, an area of 700 square kilometres. The isolation from the sea creates an extremely unique environment that supports a huge diversity of plants.

The biggest impact on the Lakes is fresh water coming off the land.

Freshwater flows into Tuggerah Lakes from rivers and creeks in the upper part of the catchment to the west. When it reaches the lakes, it mixes with a small amount of sea water entering via The Entrance channel, creating an estuary.

As water flows along rivers and creeks, it naturally brings sediment downstream to the lakes. However, if large volumes of sediment, fertiliser or pollution enter the rivers, they will also eventually be deposited in the lakes. Therefore, the water quality of these waterways is important as it will be reflected in the health of the lakes.

Fauna of the wetlands

Wetlands are areas of natural beauty with plants that have adapted to tolerate waterlogged soils, either permanently or seasonally. They may be freshwater, salt water or brackish water environments, and may include marshes, swamps, lagoons and bogs. Wetlands play an important role in filtering water, maintaining water quality, stabilising banks, reducing flood impacts and providing shelter and food for many land and aquatic animals. 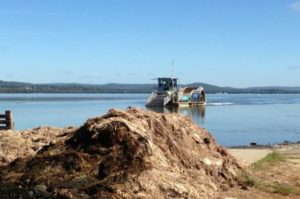 Frogs, fish, waterbirds, and many insects rely on wetlands to complete their life cycle while other native animals use them as habitat to live in, somewhere to find food or as refuge during droughts. 50% of the wetlands around Tuggerah Lake have been filled in.

Streambanks run along the edge of rivers, creeks and streams. The Tuggerah Lakes catchment has many kilometres of streambanks along its rivers and creeks which flow from the highlands in the west of the central coast region down to the eastern coast. Streambanks allow animals to move between land and water as well as safely migrate upstream and downstream along the waterway.

Riparian zones are habitat for aquatic, semiaquatic and land animals, such as frogs and lizards, providing food, shelter and shade. The Tuggerah Lakes catchment is also home to yabbies, platypus and turtles.

Seagrasses have adapted to live in salty or brackish water. Similar to land plants, they have flowers and pollen for reproduction, and roots that secure them in the sandy or muddy lake beds.

There are three main species that are native to the estuary system – Eel grass (Zostera muelli), Stack weed (Ruppia megacarpa) and Paddle weed (Halophila ovalis). Seagrasses play an important role in maintaining the health of the estuary through stabilising sediments similar to how tree roots stabilise soil.

Impacts on the lakes

One of the impacts on the lake now is the amount of pollution entering the lake. So it’s like the lake used to have 2 kidneys and now only has one and that one kidney is expected to do the job of two.

Saltmarsh is the lakes’ digestive system, keeping it healthy and clean by efficiently recycling the lakes natural by-product. It acts as a ‘drying bed’ for dead seagrass or wrack when it washes onto shore.

Wrack is like garden mulch, drying out and breaking down, providing moisture retention and nutrients for sediments. Without saltmarsh plants, increased amounts of wrack remain in the water and rot, producing additional rotten egg gas. For this reason it’s important to allow saltmarsh to regenerate and to never mow all the way to the shoreline.

Excessive nutrients in the lakes can harm the water quality and increase the amount of macroalgae in the lakes. Equally, increased sediment in the water increases the cloudiness of the water which blocks the sunlight required for the natural seagrass to survive Macroalgae and Stormwater.

Macroalgae occur throughout the year, often growing rapidly in spring and early summer. However, when high levels of nutrient enter the lakes through the stormwater system, excessive growth of macroalgae can occur causing algal blooms. Nutrients that are useful for plant growth in the garden (like those found in fertiliser) may cause excessive growth of algae and weeds in our waterways.

Litter pollution is an increasing issue for the Tuggerah Lakes estuary system and the most common types of litter in NSW include cigarette butts, takeaway drinks and food packaging, plastic, glass, cardboard and paper. In fact the first piece of plastic ever made still exists and will for 1000 plus more years.

Where there are no plants on a stream bank, or the shore line has been changed, erosion can easily occur. Soil may wash away slowly, or in steeper areas, large chunks of bank will be cut away by fast-flowing water. Many stream banks in the Tuggerah Lakes Catchment are degraded and suffering from erosion. Restoring them with riparian vegetation helps stabilise the soil, preventing erosion. 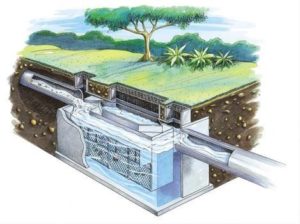 Central Coast Council has installed Gross Pollutant Traps (GPTs) (pictured) at many locations across the catchment. The aim of these structures is to help reduce the amount of sediment, pollutants, organic material and rubbish entering the waterways.

As stormwater moves along, it picks up whatever is in its path. It collects pollutants such as chemicals, oil, pesticides, fertiliser, litter, and organic material, like leaves and grass clippings, which end up polluting our lakes and affecting the overall health and water quality of the estuary.

As seagrass plants die or shed leaves, they are blown onto shore. The dead seagrass and floating macroalgae (wrack), and saltmarsh plants dry out, decompose and become part of the foreshore soils, creating a nutrient-rich habitat for invertebrates.

This is part of a natural process and provides food and habitat for many animals, like crabs, as well as protecting the foreshore from erosion. Seagrass wrack is so important to estuaries like Tuggerah Lakes that, under the NSW Fisheries Management Act 1994, limits have been imposed on the amount that is allowed to be collected. There is an assumption that there is an increase in the quantity of “weed and wrack”. In fact “Weed and wrack” have not been expanding in the lakes since the 1980’s.

Wrack collection is prioritised based on competing demands around the lakes. These include the levels of public use, benefits for environmental health, accessibility and seasonal patterns of accumulation due to wind patterns throughout the year.