I took a trip about this time last year to Kakadu National Park which had many items of interest, both flora and fauna. (All photos included here were taken by myself.) This is a summary of the talk that I gave to the Sutherland group of APS recently. Check out our District Group page.

I did the trip, over six days and five nights, through Kakadu Walking Adventure which can be found here at this website: http://www.worldexpeditions.com/Australia/Trekking-Hiking/Kakadu-Walking-Adventure.

The first location we visited was Fogg Dam which was built as a water source for a failed rice growing project in 1956. It is located on the Adelaide River floodplain between Darwin and Kakadu and covers over 1,500 hectares and is now known as the Fogg Dam Conservation Reserve. It features monsoon and eucalypt forest, open scrubland, melaleuca woodland, floodplain and open water which attract significant numbers of birds, reptiles, mammals and marsupials.

The dam has had a history of weed invasion and an aquatic weed harvester was brought to the dam by the local friends group. It was brought in to control an invasive rush, Eleocharis sphacelata (a native species but considered a weed in this situation). The plan was to use low-risk prisoners trained up to operate the machine and the expectation was that it would work full time, 5 days a week, all year round to clear the weeds and open-up the waterways again. The removed biomass was to be used as a saleable item. Unfortunately, it didn’t work very well. The resulting biomass was too low in nutrients to be viable so the scheme ran out of money to buy fuel. Also, the weeds proved too tough for the machine, which was used as more of a floating bulldozer to push the weeds to the edge where they could dry out and later be burned. The dam was a great place for bird watching.

Plants seen there included Nymphaea violacea and Nymphoides indica (Water Snowflake). The flowers of this Nymphoides are white with yellow centres. Flowers of Nymphaea voilacea range from blue, to mauve to purple to white and sometimes pink. Both species are used by Aboriginal people for food, using both the root-stock and seeds which are ground to make flour.

Most of the rivers have Alligator in the name, as that is what the early explorers believed they were seeing. They were of course much more dangerous crocodiles and we saw several on our trip.

Other plants seen included Clerodendrum costatum, a Lamiaceae member which has a bright red calyx surrounding the developing fruit. It is a common small to medium shrub often found in monsoon vine forest margins.

Bossiaea bossiaeoides (resembling a Bossiaea) is a leafless but cladodenous (having modified stems) pea-flower which might make an unusual rockery plant in sunny gardens. The Traditional Owners use it as a calendar plant. It indicates the season that honey is available in bee’s nests.

Banksia dentata is the only Banksia species growing in the tropical North and also up into southern New Guinea. It is a gnarled tree to 7 m. Flowering over the cooler months, it attracts various species of honeyeaters. It is one of the 4 Banksia species collected by Banks in 1770. The local aborigines used the old seed cones to transport fire as they would smoulder for up to two hours. It re-sprouts after fire from a woody lignotuber.

Hibiscus sabdariffa was observed. Despite being well known in Australia, this is actually a species of Hibiscus native to West Africa and, therefore, a weed. Several plants were seen in various locations including around car parks and alongside tracks. Our guides suggested that they were grown from seed discarded from jam sandwiches!

The walk took in a rock formation called Boo–rong-goy, but is commonly mis-called Nourlangie Rock. It is the site of several wonderful world-class rock-art galleries. We did a very interesting 10km circular walk through a range of different vegetation types with many unusual rock formations. In several places, the walkers were rewarded with spectacular views out over the savanna plains and woodlands with Arnhem Land in the background. 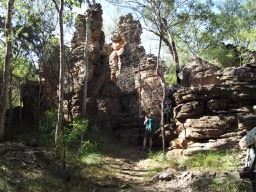 The tropical savannas are well known for their termite mounds and there were some quite enormous examples, including the largest one in Kakadu (in terms of mass). It is still active and is known to be at least 40 years old which means the Queen has been alive for that long and has been pushing out eggs all the time to keep the mound growing and healthy. 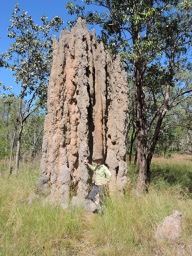 The Kapok Tree or Cotton Tree was a very interesting specimen. With its bright red flowers up to 20 cm in diameter! It is a native but also extends north into the wet tropics. 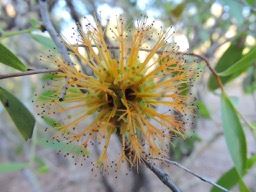 The area is home to 3 species of pandanus including Pandanus aqauticus.

Asteromyrtus symphyocarpa or Liniment Tree (pictured) is another plant with a very striking flower. The aboriginies used the leaves for a variety of medicinal purposes and in 1982, it was investigated by the Australian Centre for International Agricultural Research with members from the CSIRO and the Uni of NSW for its commercial applications.

Xanthostemon paradoxus and Eucalyptus salmonophloia (Salmon Gum) of which the hollow branches were used to make didgeridoos. Other eucalypts included E. miniata and E. phoenicea.

Calytrix exstipulata was common in the area and was successfully used to flavour the lamb roast for dinner one night. We also came across the cycad Cycas lane-poolei – one of the few Australian Cycas species. 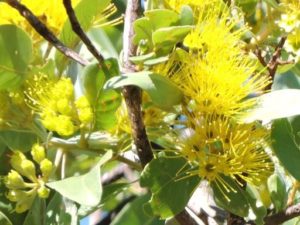 I finished my talk by highlighting an insect, Leichhardt’s Grasshopper, which spends most of its lifecycle on a Lamiaceae member, Pityrodia jamesii. This plant has small, hairy and sticky leaves which are described as very aromatic, a mix of mint and tea tree oil to taste. Leichardt’s grasshopper, named after the explorer, Ludwig Leichhardt, who was the first European to describe them in 1845, have arresting aposematic markings to deter predators.

Their interesting life cycle begins as a grub underground feeding on the roots of this plant. As they emerge to feed on the leaves, they make their way further up the plant eventually to mate and then lay eggs at the base of the plant – to start the cycle all over again.