In search of Acacia gordonii

A group of eleven set out on a group bushwalk along the fire trail from the end of Neich Road, Glenorie in late July.

To be on the safe side, we all wore face masks. Because of the doubtful weather forecast, the time was changed from afternoon to 9.30am – just as well – and we enjoyed a very pleasant morning in the bush.

The main aim was to inspect the endangered species, Acacia gordonii, which is known to grow there. This little acacia, usually about 1 metre high, has single, very bright gold flower heads on long stalks. We were hoping that other species would be starting to flower this early in native plant spring. We were certainly not disappointed. The fire trail runs along a rocky and sandy sandstone ridge top. The sparse tree cover was mostly Corymbia eximia. Large areas of rock shelf, with cracks and cervices, spread out on both sides of the track. This is the usual habitat of Acacia gordonii, and there was lots of it in small patches, now very obvious amongst other heath species. Out of flower it is hard to pick because most of the local heath plants there have small, thin leaves. One difference is that, on feeling the leaves, A. gordonii has hairy, very soft foliage, especially when young.

Boronia ledifolia was flowering in abundance. We even found a white-flowered form, and took only photos. Other species well in flower were Acacia suaveolens, Zieria laevigata, Hovea linearis, Gompholobium minus, Lissanthe strigosa and Woolsia pungens. A great many other species were in full bud with the first one or two flowers bursting out. These included Leucopogon muticus, Calytrix tetragona, Micromyrtys ciliata, Leptospermum parvifolium, Kunzea capitata, various pea flowers and three Grevilleas, G. mucronulata, buxifolia and speciosa. The latter species was the low, spreading form with smaller leaves found in Marra Marra and Dharug National Parks and Maroota.

At one point the track passed through a more heavily-wooded area, with Eucalyptus punctata and heamastoma, Angophera bakeri and even Syncarpia glomulifera. This is not Acacia gordonii habitat. Further on, the trees petered out to open onto a large area of low heath. Again the golden pompoms appeared, and these A. gordonii plants were especially healthy. It was good to see this species flourishing in a number of areas. One previous area, off the beginning of the track, had been burnt about 18 months ago, probably illegally. It had contained a large localised patch of A. gordonii in the past. Now there is just one surviving flowering plant and a few small seedlings. Hopefully more will germinate from old seed in the sand. The area had also previously contained a beautiful mauve form of Philotheca salsolifera. We found a plant of this further along the track.

In all this was a very enjoyable and informative activity. It is to be hoped that our little, endangered plant survives the climate and the activities of man. Our propagation group intends to grow some, if possible, to ensure it survives in captivity as well. 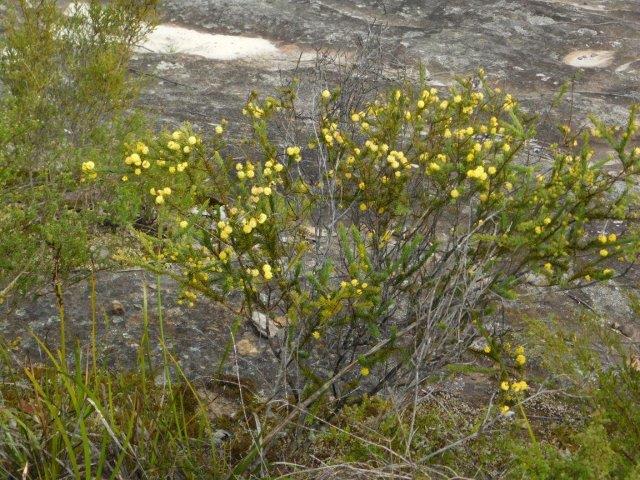 Wattle they think of next from The Sunday Telegraph, 6 September 2020

One of Australia’s most endangered wattles has burst back to life after nearly being wiped out in bushfires. Gordon’s wattle is found only on ridges and hilltops, growing in sandstone-based soils on the eastern slopes of the Blue Mountains from near Bilpin, south to Linden, and near Hornsby.

Around half of the known population in Wollemi and Blue Mountains National Parks was destroyed in the summer fires. But when a team from the state government’s Saving Our Species program trekked into a conservation site near Bilpin last month, they found the inferno had also helped.

“While the adult plants were gone, we knew that this particular native shrub needs intense heat and fire to crack open its very hard seed pods,” Trent Forges said.

“We walked up to see hundreds of bright green Gordon’s wattle seedlings emerging from the ashes. We have since seen a 400 per cent increase in the number of Gordon’s wattle plants at this site post-fires.”