I have always been fascinated with Grass Trees and they are such an iconic emblem of our bush. Those of you who have travelled to and from Inverell and Guyra via the Ensmore and Tingha Roads will have seen some great specimens (see left) along the northern section of this route which winds among the hills and crosses Paradise Creek and the Macintre River in its upper reaches.

In September Eric and I joined the Inverell Bushwalkers for an outing to the Paradise Creek area where we saw some magnificent specimens, all of which must be quite ancient.

Some, then relatively small, were included in the well known art work “Bailed Up” which Tom Roberts painted on Paradise Station in 1895 (see below).

Grass Trees grow only in Australia and occur in all States, growing in heaths and dry forests. There are over 30 species in all; locally, in the Armidale region, our common species are X. johnsonii and X. glauca. They are closely related to the Lomandra spp.

‘Xanthorrhoea’ means ‘yellow flow’ in ancient Greek and refers to its resin. This resin was much prized by Aboriginal people, being used as a glue or as a coating/waterproofing material. The early settlers also found it extremely useful, as a glue, a varnish, polish and a coating of tin materials. It was used in the sizing of paper, in soap and perfumery and even in the manufacture of early gramophone records.

Nowadays, Grass Trees are becoming much prized as garden plants and many of our members will have one or more in their garden. They are extremely slow growing, estimated to grow 1-2cm per year, though it varies between species and conditions. A 5 metre tree could be 200 – 600 years old.One suggestion from an old timer for ensuring garden survival is to add 1 cup of brown sugar to a bucket of water and apply monthly for the first 2 years. This, he claimed, helps feed the mycorrhiza in the soil which are critical for Grass Tree survival. Unfortunately grass trees are threatened by the root rot disease Phytophora cinnamomi. In a garden setting, scale infestation can be a problem and this can be managed (with difficulty) by repeated applications of white oil.

Some species will branch if the growing point is damaged. The stem/trunk is built from accumulated leaf bases, cemented together with resin. The trunk is hollow and nutrients move up inside via aerial roots.

The close up picture of the trunk (below) shows how hard and furrowed it can be. One species X. acaulis which is found west of the Divide in the Piliga area, does not develop an above ground trunk.

Most Grass Trees are able to survive fire as the growing point is below ground level where it is protected by the outer trunk. 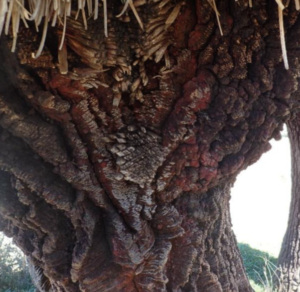 Fire will also promote flowering and blackened trunks, topped by short skirts of leaves may have multiple flower heads rising above them. One suggestion for gardeners is to pour smoked water into the Grass Tree centre to promote flowering.

Flower spikes which can grow to 2-3 metres are magnificent; the multiple small flowers, full of nectar, are mobbed by insects and birds.

The specimens observed by us on our walk through the paddocks are all old giants. Young plants are destroyed by grazing animals, cattle sheep and feral goats.

Transplanting is difficult with a high failure rate. Young, seed grown plants can be purchased from nurseries. Just be patient.