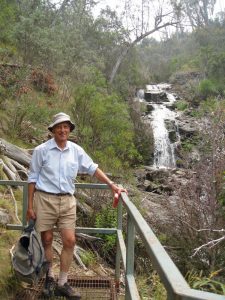 Dr Robert Failes has been a stalwart of the North Shore Group and a staunch supporter of their endeavours.

Below are the volunteer positions that Robert has held during his membership of the Australian Plants Society since 2003. 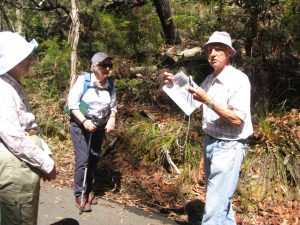 Robert has made significant contributions to the APS Walks and Talks program (now in its 34th year of weekly sessions at Ku-ring-gai Wildflower Garden) by presenting talks on the history and geography of KWG and the understanding of botanical nomenclature as well as giving botanical family-structured W&T’s on Fabaceae (peas and wattles), Ericaceae (heath), Myrtaceae, Proteaceae and some lesser known families: Acanthaceae, Apiaceae, Asteraceae, Cunoniaceae, Elaeocarpaceae, Euphorbiaceae, Goodenaceae, Malvaceae, Phyllanthaceae, Picrodendraceae, Polygalaceae, Primulaceae, Sapindaceae, Stylidiaceae and Thymeliaceae.

Maybe Robert’s most valuable contributions have been his welcoming and affable approach overlain by his ability to impart his knowledge to all comers and to mentor new members, to enable them to grow in confidence and knowledge about our native flora.

He received the 2007 Melba Dyer Award, the Group’s highest award, for making the most valuable contribution to the Group this year.

Three books written by Dr Failes are testimony to his breadth of knowledge, his passion for research and his skill in teaching and imparting knowledge in a practical way:

Robert lived his first years (1930-33) on a family farm near Baradine in country NSW before moving with his brothers and parents to live in Longueville, but school holiday trips to Coonamble and helping on their sheep farm were still part of his growing up. His love of playing tennis was fostered during school years and at Sydney University 1948-51 and he continues to play to the present time. 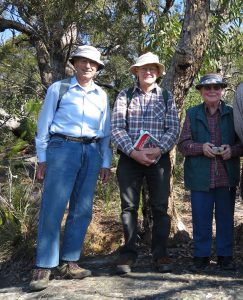 His periods of teaching chemistry and maths at high schools across NSW introduced new hobbies: in Cooma skiing, in Narrandera theatre, music and fishing, and in Grafton tennis, fishing, water skiing, and theatre. Overseas travel followed, with teaching in the UK and skiing in Austria. Returning to teaching in Uralla, in country NSW, lead to a PhD in chemistry from UNE and marriage to his wife, Jill Menzies. Robert spent the rest of his career at Macquarie University and developed novel teaching methods in chemistry, worked secondments in Indonesia, contributed to setting HSC examinations in chemistry, and undertook research during sabbaticals in Dundee, Scotland and Ottawa, Canada.

In the last years of the 20th century and into the next, Robert

Since retiring from Macquarie University, Robert Failes has increasingly devoted his time to the Australian Plants Society, North Shore Group, especially their active partnership with Ku-ring-gai Council at KWG. His brisk walk and dedication allow him to check the state of the hundreds of plants with associated signs distributed throughout the reserve and to record their GPS locations in the database of plant species and locations maintained by the North Shore Group.

On behalf of the North Shore Group, we wish to commend Dr Robert Failes to your consideration for the award of Life Membership of the Australian Plants Society, NSW.