Daisies provide a delicate, multi-coloured and spectacular impression on the seemingly harsh and dry looking bush areas of Western Australia (WA). Growing everlastings and other colourful daisies for your own spring show is guaranteed to bring great pleasure and satisfaction. This is the second of three articles about the wonderful WA daisies.

In our first article, we shared with you that daisy flowers are not really flowers. Instead, they can have two kinds of florets, disc and ray. Some daisies such as Brachyscome, Podolepis and Roebeckiella, have both disc and ray florets. Others have only disc or ray florets.

Here we talk about this second type of daisy and how to grow them.

Most of the well-known Western Australian daisies are in this category, with disc florets only. The pretty petal-like structures that surround the disk are not petals but are modified bracts. If the flower is dried, these bracts retain their colour (at least for a little while) and become paper-like. Hence names such as “paper daisies”, “straw flowers” or, more commonly, “everlastings”.

Which ones can I grow?

Here are some of the most beautiful, arranged in sequence from most commonly (and easily) grown to the seldom grown!

What a mouthful of a name! The type species was collected by James Drummond who was notoriously reticent about disclosing the sites of his collections. In this case, it is thought to have been somewhere in the Moore River area, an hour north of Perth.

Rhodanthe means “rose-coloured flower” and “chlorocephala” means green head, but according to FloraBase¹ , flower colour is yellow. The problem is that no one can be sure because no one has seen the plant again; all we have is the dried specimen. So the name means the pink subspecies of the green headed species of the rose-coloured flower – and that is a bit dicey also because the flower colour ranges from deep pink through to white.

This is easily the most widely cultivated species in Perth and is seen as mass displays in Kings Park and on street verges in many suburbs. The seed is readily obtainable, germinates readily, and rewards the grower with a spectacular display.

The main problem is that the seedlings are like chocolate ice cream to snails: they will travel many metres for the treat. A promising patch of everlastings can disappear in a couple of nights. The only practical solution seems to be profligate use of snail bait.

This is a somewhat more delicate species with a slender stem. It therefore tends to be “floppy” if grown with too much nitrogen. The disk is somewhat smaller than for the above species and the bracts that surround the flowering head have an attractive silvery appearance. Mostly the flowers are a uniform deep pink, but white forms also occur. Seeds saved from last year are difficult to germinate but seeds that are one year older germinate readily.

There are two species of interest to gardeners. Schoenia filifolia is an attractive annual with narrow, thread-like leaves (hence the name ‘filifolia’). The yellow flowers are of reasonable size and held above the plant to make a good display. They do not fade, in contrast to Rhodanthe chlorocephala for which the pink forms fairly quickly fade to white. Again seeds that are 18 months old germinate readily.

Schoenia cassiniana is an attractive pink-flower everlasting easily recognised by the branching structure of the plant. I grew it for several years but eventually lost it as a result of planting the seeds too deeply! It seemed to be fairly sensitive to phosphate supply.

Other stunners for your garden

Another yellow everlasting with large heads of yellow flowers. Kings Park grows a few in their gardens. It deserves wider cultivation.

This curious plant comes in two colour forms: white and golden. In the bush, they seldom mix so you get pure stands of gold in one place and pure stands of white in another.

The gold form is particularly obvious, covering large swathes of landscape in the Coalseam Conservation Park, about 400 km north of Perth.

Yet another showy golden everlasting but one seldom seen in cultivation.

You get two for the price of one with this plant: the bracts that enclose the flower are attractive before the flower opens. They are often infused with a touch of red. Then the flower opens to give you a “standard” golden everlasting. It really should be seen more often in gardens. 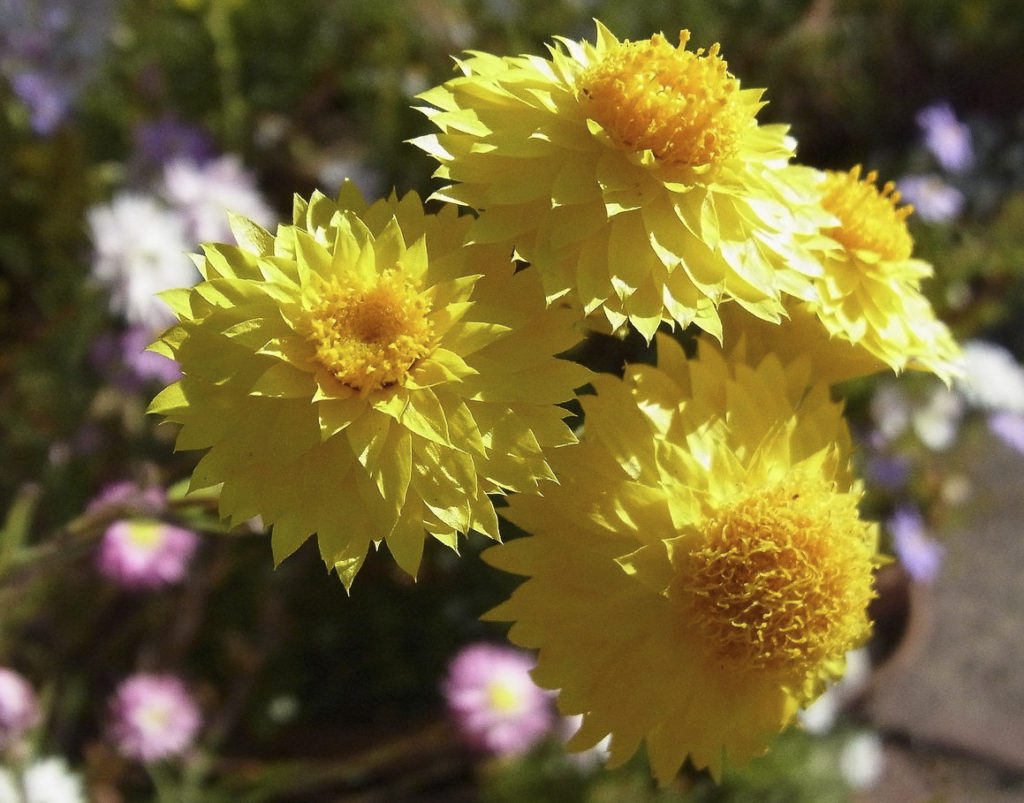 Lawrencella rosea is a small pink everlasting that holds strongly to the “live fast, die young” motto: the plant makes sure that seeds are formed soon after flowering.

Lawrencella davenportii is a larger species with prominent large flowers and remarkably large seeds. You would think it would be easy to grow. I found that seed collected from the bush germinated fairly well but I never did crack the secret of germinating seed from garden grown plants.

Most of these plants come from the semi-arid zone. They are adapted to a fairly tough environment. They must only germinate when soils are moist enough for them to have a fair chance of completing their life cycle. Many of them will only germinate when exposed to light. This is counter intuitive: any good gardening book will tell you to plant seeds at a depth of 2 to 3 times the size of the seed. Following such sensible guidelines is one of the major reasons why people fail to grow everlastings.

How does such a curious requirement work?

If you get summer rain, the surface soil will only stay moist for a day or so. Not a good time to germinate. But if the surface soil stays moist for 4 to 5 days, it is a fair bet that the soil is well moistened and there is a fair chance of completing the life cycle. How do you know if you are a seed on the surface? Because you have access to light, of course.

They must then be able to grow quickly, flower, and seed during the short window of opportunity.

Live fast, die young is all very well but if a plant is to do this, it must have a reasonable supply of nutrients. This poses a dilemma for the gardener: you must supply enough nitrogen and phosphorus for the plants to grow reasonably well, but too much and you get soft floppy plants – and of course weeds also like a high nutrient environment. So apply a little bit of fertiliser a couple of times while they are growing.

At the end of the growing season, the seeds are shed, and in the natural environment, must be able to withstand several months when temperatures at the soil surface can get as high as 60°C followed by quite cool nights. Seeds that are so well protected that they can withstand these extremes can sometimes be hard to germinate. In some cases at least, it is just a matter of time. Seed from the previous year, which is say about six months old, can be very difficult to germinate, but seed that is a year older is much easier.

In the south-west of Western Australia, there are quite a few plants that only have ray florets – and most of them are weeds! These include plants such as dandelion, flat weed and sow thistle.

Consequently, the few that are native can easily be mistaken for weeds. This applies especially to Sonchus hydrophilus, which apparently has been here for a very long time but was initially mistaken for a weed.

More palatable is the “Yam Daisy”. According to FloraBase², the correct name is Microseris scapigera, but most articles on the Internet refer to it as Microseris lanceolata. The plant does look rather like a large dandelion. It even has a seed head like a dandelion “clock”. The root tubers were a major food item for aboriginal people, in the south-east of Australia where it is referred to as Murnong. It was also eaten by the Noongar people.

Unfortunately, it was also eaten (avidly) by sheep and it soon became quite rare. In the south-west of Western Australia, it is now confined to the margins of salt lakes, granite rock areas and samphire flats. I remember tasting it as a boy in central Victoria: as I recall it tasted crisp and sweet.

“Plant Microseris lanceolata seeds by pushing them straight down in the soil just leaving the fluffy ‘wing’ exposed, in a well-drained mix in full sun or part shade. This is best done in autumn/winter in subtropical zones to avoid the hot wet summers where damping off becomes a problem. Keep moist until germination in 1-2 weeks. Separate seedlings when large enough and plant in a deep pot.”

The plants are reported to respond to fire and were surely fire-stick farmed by Aboriginal people. It is a fair bet that germination would be improved with smoke.

Where do I get seed?

Seeds of most of the species mentioned above can be obtained online from Nindethna Seed Company. Microseris scapigera can be obtained from Natural Regeneration Australia. Rhodanthe chlorocephala subspecies rosea can also be obtained from Australian Wildflower Seeds along with seed starter, that is, vermiculite that has been exposed to smoke. Unfortunately, I could not find a source for Myriocephalus oldfieldii.

In our next article, we’ll share with you tips for growing Western Australian natives so you can create your own stunning displays.

Jim worked for CSIRO for 40 years, “retiring” as a Chief Research Scientist in 1992. Since then, he has continued his scientific work, publishing more than 40 scientific papers since “retiring”. He also devoted time to his wildflower interests. He is a past president of the Wildflower Society of WA.

Hazel’s life-long interest in wildflowers, including 20 years in the nursery industry, has given her an encyclopaedic knowledge of WA plants and their cultivation and propagation. She is a Life Member of the Wildflower Society of WA and recipient of the Australian Plants Award in 2013.