Congratulations to John Arney, who received the APS NSW Conservation Award at the AGM in May 2021.

The following nomination was submitted by Sutherland Group. 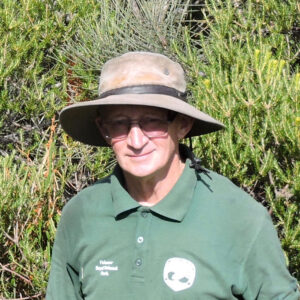 APS Sutherland Group is very pleased to nominate John Arney for the APS NSW Conservation Award. John Arney is deserving of recognition for his contribution to conservation of Australian native plants through his efforts to increase knowledge and awareness amongst APS members and the public.

Active in Sutherland Group as Walks coordinator and more

For many years, he has been the Activities Coordinator for Sutherland Group. In this role he has organised bushwalks and outings to introduce members to the area and share knowledge about our local plants. In many cases, John prepares a list of species likely to be seen on the walk. He uses many different sources for these lists such as older lists in the group, our Coastal Plants of the RNP CD, books and previous walks. Lists are regularly updated. Afterwards, John often writes up these walks for our monthly newsletter to share the activity with other members who were not able to make it.

A particular focus of John’s in recent years has been rediscovering plants on the list of over 100 plants collected by Joseph Banks and Daniel Solander in 1770 at Botany Bay to use on walks in Kamay National Park. This has required many walks in the area leading up to the 250th anniversary in 2020. John wrote an article on this work for Australian Plants journal in 2020.

He has also organised Sutherland Group’s very popular week-long trips to Charlotte Pass in the Snowy Mountains every two years. These trips are a great introduction to alpine flora for Sutherland Group members, and more recently members of other groups. John organises the week very carefully with a program of walks and alternatives and lots of information.

He is also an active member of the twice monthly working bees at Joseph Banks Native Plants Reserve at Kareela. He made plant labels on our metal engraving machine for the reserve for many years and contributed to other projects at the reserve. The reserve is an accessible environment to introduce people to Australian native plants.

John has also had a very active role in conservation through his founding role in the group Friends of Royal National Park which was established in 2010 with objectives to coordinate and foster understanding and cooperation between people and groups with diverse attachments and interests in the Royal Area and to support and encourage volunteer community involvement in these reserves.

John was elected President of Friends of Royal for two terms from 2015 to 2019 and has been Vice President since 2019. In various other roles with Friends, he has liaised with National Parks staff and other stakeholders on a range of projects to maintain the quality of the natural environment and to improve services and facilities at the park so more visitors can appreciate the unique natural environment. He has conducted Streamwatch activities to monitor water quality.

John leads volunteer working bees in the Royal National Park to achieve conservation in a very practical sense by removing weeds, often in less accessible areas. As part of this work, John discovered a new coastal weed in the Royal National Park, Plecostachys serpyllifolia, which he reported in Native Plants for NSW January 2018, including that it appeared to be the first official record in Australia. John has also designed tools to make killing weeds even more efficient.

John also has a strong interest in history including of the Royal National Park and environs which enhances his conservation work with a deep understanding of context.

All activities John organises and leads are always conducted to the highest safety standards. Through his efforts in so many different areas, John has contributed to conservation of Australian native plants.