Barry has always been supportive of all members, especially those on the committee, and provided constructive advice whenever needed. Barry almost always attended the monthly group outings and annual trips away. Barry would beaver away at working bees at the APS North Shore Group propagating area at Ku-ring-gai Wildflower Garden, where his engineering expertise and practical skills always facilitated a positive outcome.

As one member commented, “I think he was a great president and carried out the presidential duties with enjoyment, tact and good humour (a lot of it self-deprecating!)”. At meetings, visitors and members were always welcomed and Barry would often gently explain to newcomers why botanical names were so important for the accurate identification of plants. Barry also offered unstinting assistance to some members who needed extra help with their personal situations. Despite his own commitments, he never shied away from being there for others.

Barry has always fulfilled the broader role of president of a group and attended APS NSW meetings and gatherings and participated in the various forums, as required.

Barry’s interest in native plants is focused on LOCAL species as they are found in the local bush. He has an extensive knowledge of local native plants. While not focusing on gardening in their bushland setting, he and Noni have a native garden around their house. This garden is a joy to behold. Barry’s childhood was spent in the bush but it was only in the past 20 years that he started focusing on names and fine tuning his extensive experience of native plants. At a recent meeting, members talked about their favourite plant and, in keeping with his genuine and gentle approach to most things, Barry said that he particularly likes Adiantum species, i.e. Maiden Hair Ferns.

In a previous life, Barry had a full-time position with the organisation previously known as the State Rail Authority NSW and he has travelled extensively throughout NSW. Barry recently gave us a deeper understanding of the complexity of the rail lines and interchange arrangements at Hornsby Station while we were waiting to go on an outing. 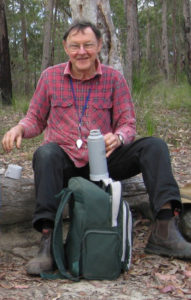 Barry has been active in the Hornsby Herbarium work on an almost weekly basis for about 20 years. This involves a small group of very dedicated people going out into the bush in Hornsby Shire. Plant surveys are done of native plant species on Crown land, National Parks and Reserves from Wisemans Ferry to Bobbin Head and south to Pennant Hills and Hornsby.

This team of dedicated people traipses all over the fire trails and tracks of Hornsby Shire in Barry’s ancient, but excellently self-maintained 4-wheel drive doing plant surveys, investigations and the collection of particular plants, including rare species.

Barry wouldn’t let thick scrub or cliffs get in the way if he was on a mission to track down a particular plant. Sometimes these outings were for surveys for Hornsby Shire Council, property owners or other groups involved in bushland conservation. He has also managed the Herbarium website and all the data for the group over many recent years.

Volunteering at Landcare and Streamwatch

Barry has also been active in his local Still Creek Landcare group based at Fagan Park, including being the coordinator. The group also cares for other surrounding areas, including Carr’s Bush. This work involves bush regeneration, planting native plants and providing advice to landholders on many aspects of growing native plants and managing their bushland. Not content to be land bound, Barry has also assisted with the Floating Landcare group on the Hawkesbury River. Barry’s own property is a “Land for Wildlife” reserve with the Office of Environment and Heritage. APS North Shore Group members have been extended hospitality on group outings there.

Barry has contributed to Streamwatch by doing water quality monitoring in local streams. He also supported other plant and bush conservation causes by making submissions and representations to government and other organisations.

Barry is an inaugural member of the Landcare Group and was at the first Expression of interest meeting held over 11 years ago. He has participated and contributed from the start and enthusiastically continues to today.

Barry has been involved in every project our Landcare group has undertaken. I estimate >15 major one off projects as well as our annual projects for Weed of the Year, Plant Giveaways, Weeds for Trees and Community Engagements.

The Trees for Weeds has been an astonishing success over the few years it’s been running with Barry being the main driver. It has now become a major Annual Project for our group. Barry would visit each of the applicants properties and provide expert advice on how to manage weeds, what natives would be best suited to each site and then provide advice on how and when to plant.

Barry has been a major instigator of our projects and has contributed more volunteer hours than anyone else in the group. He is directly involved in ordering materials, plant selections, weed management methodology, scheduling contractors and general operational project management.

As a researcher, Barry would provide invaluable insight into how to best achieve the desired outcomes. His research on Bell Minor dieback is a good example. Barry proposed and used the latest approaches to eliminate the domination of the Bell Minor Birds. He created a more diverse environment by removing the dominant weeds base and planting a diverse plant population that introduced competition to the Bell Minor Birds, ultimately rebalancing the area and halting the dieback. He also shared the information back to Local Land Services to aid other Landcare Catchments.

Barry would always trial new methods and share his findings with others. A good example of this was when we ‘Deep Stem Planting Method’ on a trial site. We had a very good outcome with improved growth and survival rates all because of an article Barry had read.

Our group has regular monthly working bees all over our catchment to maintain finished projects and to help locals with worthwhile projects. That’s over 120 working bees to date. Barry’s contributions usually led the way in ‘how to’, ‘what is that’ and ‘I’ll find out for you’ areas

Our Landcare group publishes monthly press releases and produces handouts on a myriad of topics to support landholders. Barry has produced a large number of wide ranging articles for our local Community News. He has also penned a number of brochures covering many topics such as weeds, plant me instead, native grasses, propagation and much much more. Again it would take time and space to list all his contributions here. Barry was also a great contributor in his reviews of our publications, keeping us to the facts and offering improvements where he saw fit.

As an aside, Barry is the most photogenic of our group and his face has been used on many occasions with his broad hat and smile at the ready.

Barry is our main go-to person for research, weed management, regeneration methods, planting methods, herbicide use and methods and even bush regen for climate change.

For around 10 years, Barry has been part of the catchment water testing team being responsible for a sample area at the headwaters of Still Creek. Barry took monthly samples, tested, evaluated and reported via data entry into the Streamwatch program.

Landcare carries out various annual community engagements: Hornsby Council plant giveaways, local school fairs and occasional other activities. Barry has always enjoyed participating in these activities where his knowledge shines and he can share his contagious enthusiasm for nature with the public.

Other volunteering for the community

Barry’s volunteering is part of a pattern of consistently helping the community over time.

Barry has been an extremely active member of TAD Disability Services (TADNSW) over almost 40 years. In this role he puts his vast engineering and innovative and creative skills to work to assist in designing and making individual equipment for people needing help.

Barry carries out the design, construction and familiarisation of the technical equipment be it for self-care, working, transport, recreation, schooling, or feeding purposes. One example of his work was to make a cutting board device that allowed a young boy to use scissors after he became a quadruple amputee due to meningococcal disease. Such equipment provides significant improvements to the person’s independence, enabling them to live more fulfilling lives, participate more equally with work and school colleagues, friends and family, and participate more fully in society.

Barry has contributed to various local publications and spoken to various groups about Landcare, native plants and TAD.

Barry has spent many an hour up the fire tower on look-out as part of his duties with Hornsby Ku-ring-gai Rural Fire District Support Brigade.

Still not one to be idle (Barry doesn’t know the meaning of that word), he participated in an amateur musical group (Loosely Woven) for several years by repairing musical instruments, making props and being part of the “cheer squad” at events. This group raises money for charities. On a few occasions, Noni and Barry provided the musical entertainment at the APS North Shore Group Christmas parties.

Barry’s contributions have been outstanding in all fields: in his leadership; his ability to inspire and encourage others; include his willingness to shoulder responsibility and to achieve goals and to lead by example in workshops, meetings, bush regeneration, survey teams or for the Hornsby Herbarium Library website. Barry’s love and respect for our native plants is contagious and he has inspired many others to share his passion.