Ian Cox from Parramatta Hills Group shares his walk to Mount Banks in Blue Mountains National Park, one of the highest points in the Blue Mountains – just three weeks before bushfire.

In November 2019 Lesley Waite and I went on a magical walk to the summit of Mount Banks. The objectives of our visit were twofold – to indulge in the beautiful upper Blue Mountains flora, and to experience the magnificent surroundings and views. We were not disappointed in either of these. However, we were not to know that in less than three weeks this area and many others would be scorched and blackened by a massive bushfire.

The fire has changed everything, at least for the immediate future. It will be worth watching the vegetation’s recovery and the re-greening of the landscape over the next few months and years.

The walk to the summit is not long or difficult but a bit steep in parts. As you can see above, at the start of the track previous walkers were happy to make their walking sticks available for subsequent users. However, although one member of our duo is ‘not young’, he managed to make the journey without their help.

The track starts off in open woodland, but after a modest climb soon comes to low-growing heath and bare sandstone. This part of the track is where the best views are to be had, and also where the interesting plants are.

The heath vegetation is what I like best (above). You can easily see the plant that asks for a closer look. And there were so many. Our cameras worked overtime!

The heath is dominated by the Proteaceae family such as dwarf Banksia serrata, Hakea dactyloides (left photo above), Hakea salicifolia, Isopogon anemonifolius, Lambertia formosa and Conospermum taxifolium (right photo above).

One plant that is quite prolific and makes its presence known with profuse white flowers is Hakea teretifolia. Here, it is semi-prostrate, less than half a metre high, and quite attractive so long as we didn’t get too close to its needle-sharp leaves. It is in the background of this photo below of Lesley engrossed in botanical research.

Another notable plant is Darwinia fascicularis ssp. oligantha. We noticed this plant near Wentworth Falls on a previous trip, sprawling over the rocks as if taking advantage of the glorious views. It was doing exactly the same here. It seems to position itself only over and around rocks that afford the best outlook – a very clever plant! You can see it doing this in the photo below.

The views are breathtaking. You feel so privileged to be here, amid the wonders of nature! The darwinia and hakea are both enjoying the view of the Grose Valley below.

When the Parramatta and Hills Group walked here over 20 years ago, I vividly recall seeing a profusion of Boronia floribunda flowering at this time of year. However today we noticed only a few of this species. Why is this? Could it be because of different fire regimes, or climate change?

As you start the climb towards the summit, you can clearly see the thick forest growing in the rich basaltic soil that caps Mount Banks:

Here the forest is dominated by Eucalyptus cypellocarpa. The understorey is quite thick, and contains several species of ferns. Because of the tall trees surrounding the summit there are no sweeping views in all directions, and you don’t get the feeling that you’re on one of the highest points in the Blue Mountains. But you do get a great sense of achievement!

At the summit is a memorial plaque to George Caley, which reads:

With companions travelled via Kurrajong and ascended the Mount on 15th November 1804.

He named it Mount Banks after Sir Joseph Banks.

There ended his heroic attempt to cross the Blue Mountains 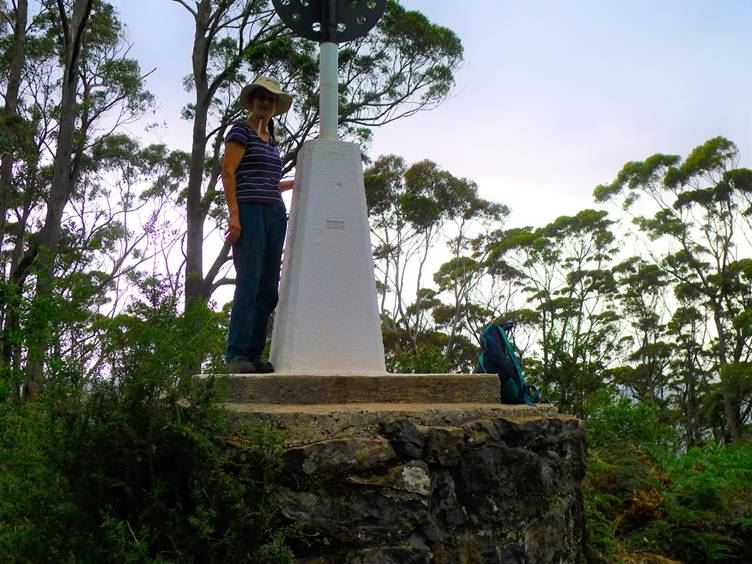 Caley took three weeks to reach Mount Banks. In a letter to Banks after his return he wrote: “The roughness of the country I found beyond description.” And from his journal: “. . . it was the most laborious (journey) man ever went to. Every day sweat poured down in torrents, and our clothes were commonly as wet as if they had been dipped in water.”

Caley’s epic journey, and our visit today, couldn’t have been more different!