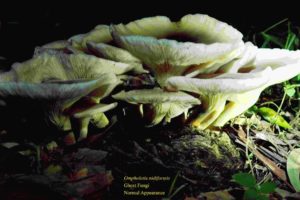 Interested in bioluminescent fungi? It is about this time of the year these fascinating fungi appear in the Hunter Region Botanic Gardens especially after the rain of recent times.

The fruiting bodies should be appearing soon and there are several people keeping a lookout. If any appear, walks will be organised.

For those interested I have included some images of Omphalotus nidiformis and an open source article that explores the way the fungi glow.

The Hunter Region Botanic Gardens have organised walks for the past few years although last year was abandoned because of lack of reasonably sized fruit and the very short term nature of the ones present probably due to the lack of Autumn rain. 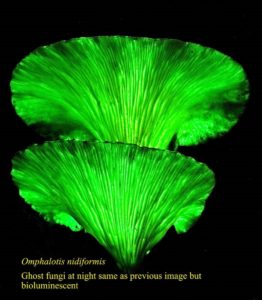 In organising walks, there is quite short notice as there a couple of factors at work:

It means a night time visit to the Gardens and guides organised.
It is best held on a moonless night…not always possible
Sometimes the fungi are apparent for relatively short periods so people have to be ready to come at a moment’s notice.
Some visitors just want to walk around and find the fungi…others wish to try their hand at photography which has its own challenges. Because the two groups are not compatible, generally two different night walks are organised or the photographers descend after those that are only interested in seeing them have left. This often means a fairly late night and sometimes standing with an umbrella over the tripod and camera (photographers can be committed sometimes…or ought to be). 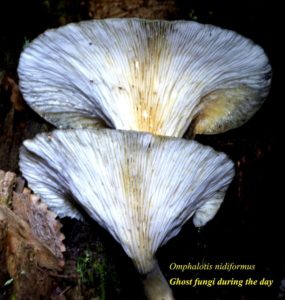 It is a strange feeling to walk around in the dark and see these glowing fruiting bodies dotted through the bush. How bright they are depends entirely on the amount of darkness.

Photographing the fungi can be challenging as there are long exposures involved and the actual glowing is not as bright in reality as the images depict.

They are best observed on a moonless night and using a tripod, complete darkness and no lights or movement near the tripod. Exposures vary according to conditions but can be 20 mins or more. It’s a challenge but the results can be worth the effort.

If anyone is interested in a walk it is essential to be on a list and be prepared to come with short notice. Those wishing to attend should keep an eye on the Hunter Region Botanic Gardens face book page accessible from the web page (www.huntergardens.org.au) 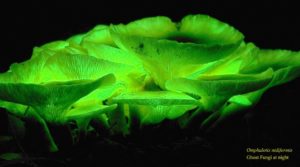 “A team of researchers from Russia, Brazil and Japan has uncovered the means by which two kinds of mushrooms glow in the dark, as evidenced in their paper published on the open-access site, Science Advances.

Scientists have long been fascinated by organisms that produce their own light (bioluminescence) and research has led to an understanding of how the process works in many insects and seafaring organisms (and recently in a frog). But how it works in fungi has remained a mystery. In this new effort, the researchers have finally solved that mystery.

Prior research has found just 80 species of fungi that are bioluminescent out of approximately 100,000 around the globe. It is believed that such fungi glow in the dark to attract wasps, beetles, flies, ants and other creatures—spores adhere to their bodies and are carried to other places, colonising new territory.

The new research showed that bioluminescence occurred in the mushrooms when luciferin molecules interacted with a luciferase enzyme in the presence of oxygen—the reaction resulted in the production of a light-emitting substance called oxyluciferin. Over time, the oxyluciferin released its oxygen bringing the luciferin back to its ground state. The process repeated, allowing the mushrooms to emit light in the presence of oxygen. The team also found that luciferase in fungi appeared to be what they describe as “promiscuous,” because it interacts with a multitude of luciferin molecule derivatives. They also found that they could change the colours emitted by a slurry of ground-up mushroom parts by changing the amount of luciferin in the mix, which suggests they may be useful in synthetic form in human applications such as imaging research—luciferase could potentially be used as a reporter gene in genetic research, for example.”

Learning more about how nature produces bioluminescence has already led to applications in human endeavours—bio-researchers, for example, use them to aid in tracking cells to learn more about biological processes.”