A wander through my local Newcastle bushland

With the COVID lockdowns and more of my work being done from home, I’ve taken to enjoying some lunchtime walks in the patch of bushland that is near my place (circled below).  With weekly walks through the area I’ve been able to observe the changes to the plants through the year and have found many gems tucked away.

The area itself is a section of ridge line to the west of John Hunter Hospital and south of the Jesmond roundabout.  There are fire trails that run along the ridge tops and many smaller walking tracks through the area. It has sections with slopes to all points of the compass and some areas of moister gullies.  It is also going to be subject to the completion of the new inner city bypass which will bisect the area from north to south passing just behind the Hospital and joining up at the Jesmond roundabout.

There are many access points to get into this bushland, some of the easiest to access being from the ends of Bellinger Close, Kalinda Close, Metcalfe Street, and Sygna Close.

I have found a much greater variety of plants than I would have initially expected, for example there are at least 10 species of ground orchid in the area and 9 species of Acacia.  The area also contains some rare and threatened flora. Many of the plants are also quite suitable for use as garden plants. 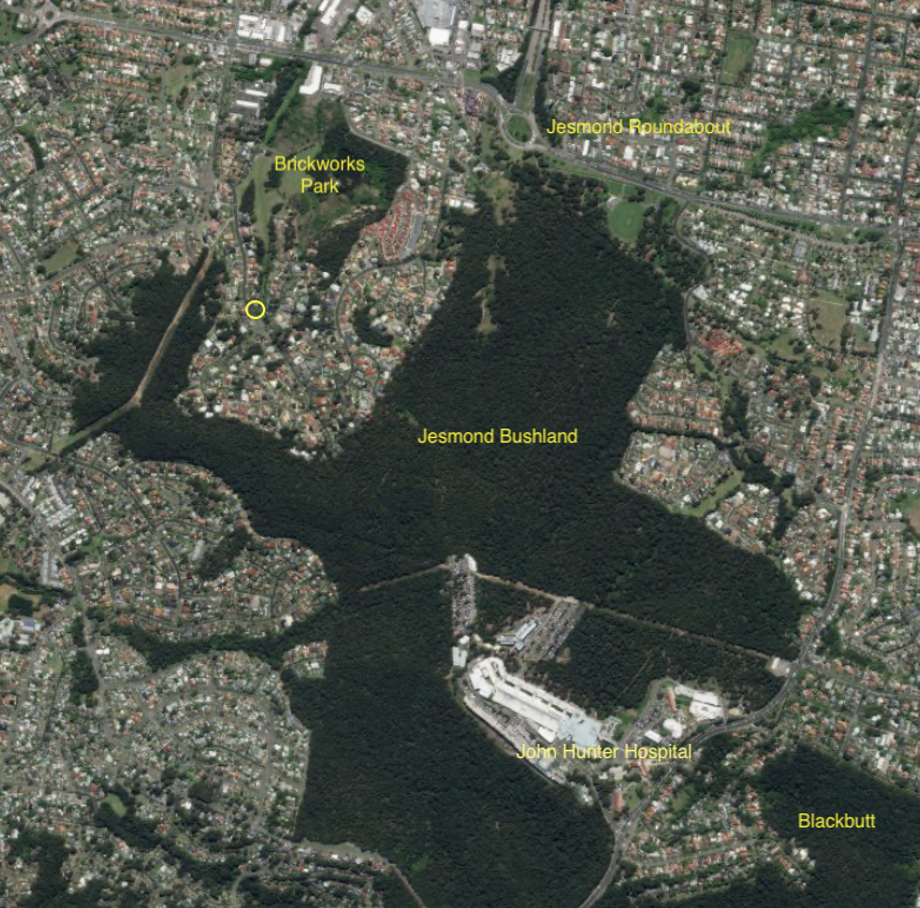 Orchids can be found in flower for most of the year, some only for a few short weeks. Below is a list of the orchids that I have seen and photographed. (Acianthus fornicatus below). 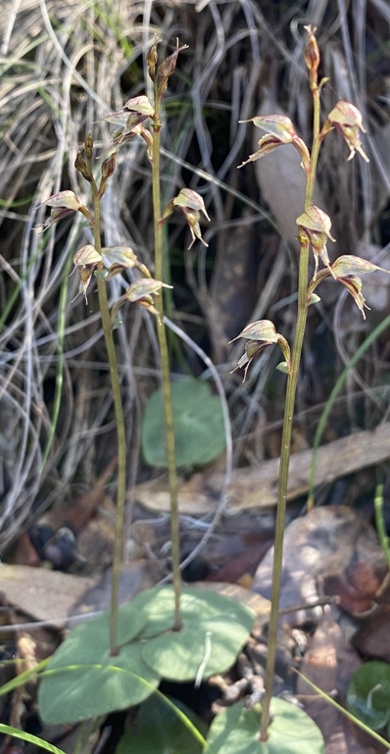 The highlight of autumn this year has been the impressive flowering of the Hairpin Banksia – Banksia spinulosa var. collina.  The plants are found in groups in the woodland on the hilltops, and there are a range of different colour variations to be found. 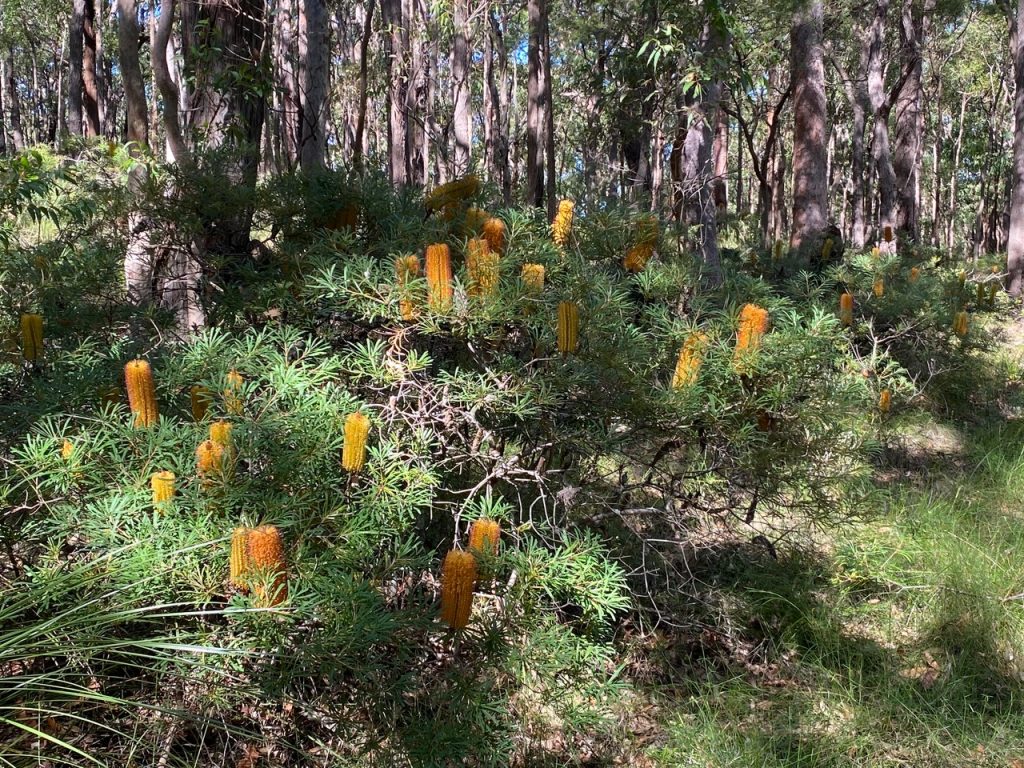 Heading into winter the wattles start to flower, the variety of different species ensures that there is an Acacia of one type or another flowering through to the end of spring. The main flowering time for the ground orchids starts in winter with something then in flower through till summer. The Hyacinth Orchids (Dipodium) are widespread and in a good year can be found flowering over a long period. 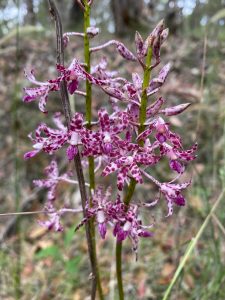 Late winter into spring brings on a profusion of different flowers.  Amongst these is the threatened Tetratheca juncea – Black Eyed Susan with its bright pink flowers. The local form of the Wonga Vine – Pandorea pandorana,(below) is nice and seems to not be as vigorous as the forms commercially available.  Other local climbers are well represented with Kennedia, Hardenbergia, Hibbertia (both dentata & scandens), Clematis and Billarderia all present. 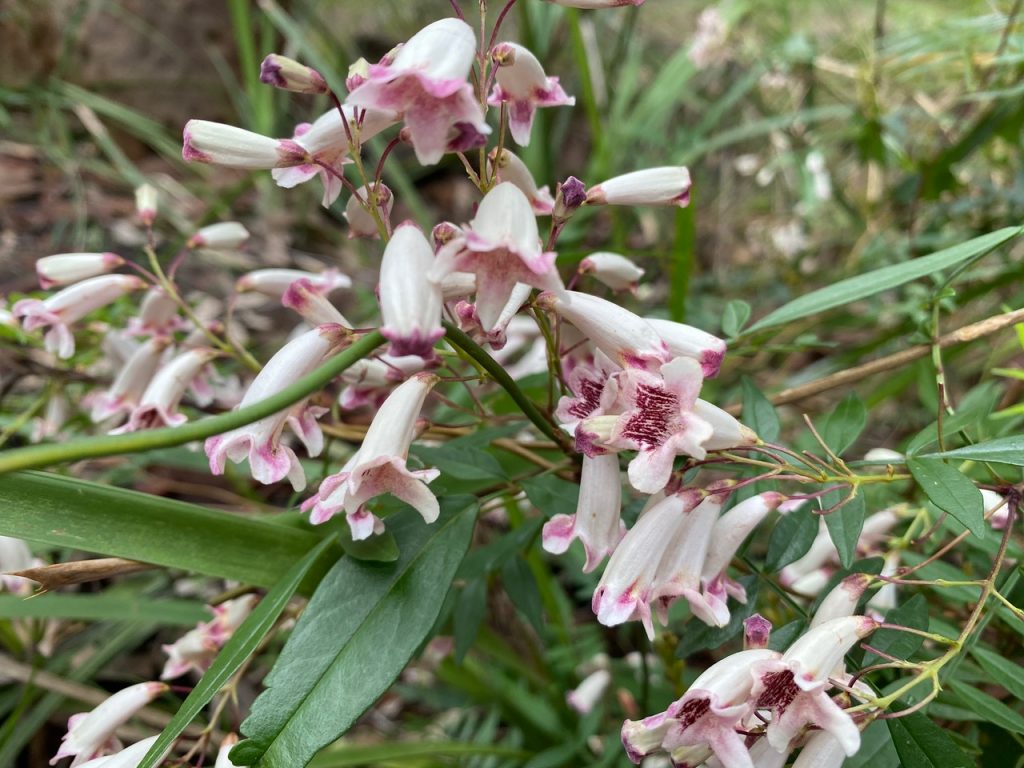 Into spring and summer

Heading into late spring and summer the peak of the flowering passes, but there are still some interesting plants to see, amongst these is the Bottlebrush Grass Tree – Xanthorrhoea macronema (below).  This is smaller than most grass trees and does not get a trunk the shorter flowerhead give rise to the common name.  There is also a good form of Yellow Buttons – Chrysocephalum apiculatum (below) at the western end of the area.

Heading back into autumn there are things that are early and late from other seasons, plus the Coral Heath – Epacris pulchella (below) can be found, along with Narrow Leaved Geebung – Persoonia linearis and the purplish berries on the Elderberry Panax – Polyscias sambucifolia (below).

What’s in your patch?

I’ve only given an overview of the many and varied plants that are found in this patch of bushland, there is still more to find. Apparently there are a handful of plants of Grevillea parviflora to find near the southern edge of the Hospital that I’m still to find.

I look forward to seeing what everyone else can find in their local patch of bush. There are also some pretty good views from the western end.