What better way to celebrate Botanic Gardens Day on 30 May than a visit to a garden which is a community project that is entirely the work of parkcare volunteers.

The one hectare site of the Shoalhaven Heads Native Botanic Garden packs a lot in with a thoughtful design, paths and grassed areas. The plants from around Australia have informative labels and there is interpretive signage.

There is also artwork in timber, stone, mosaic and metal throughout the garden, which beautifully complements the plants.

Even the toilets are beautifully illustrated.

Major planting of shrubs took place in September 2010.  Many other plantings have been added since then, emphasising endangered, rare and unusual Australian native plants. In September 2017, the name Curtis Park Arboretum transitioned into Shoalhaven Heads Native Botanic Garden. 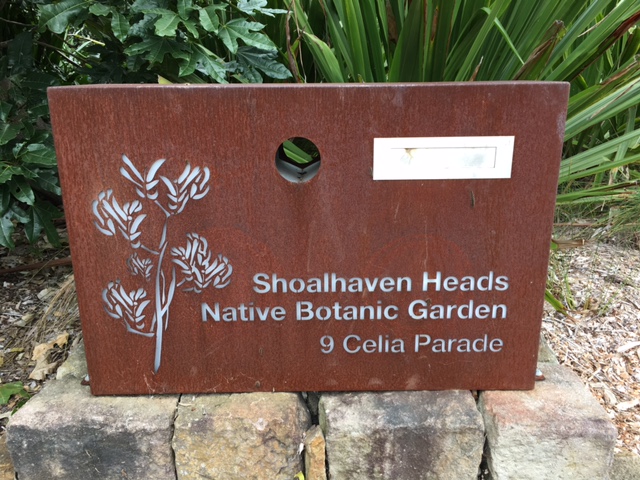 Across the road from the garden is a planting devoted to Western Australia plants.

At this time of year, when there are fewer flowers, there is much interest in the fruits and seeds. Doryanthes palmeri is found in Queensland and has an arching elongated flower spike unlike our upright local Doryanthes excelsa (Gymea lily).

The foliage of some plants was also looking particularly lush.

The only improvement would be better signposting within the town of Shoalhaven Heads to help visitors find the garden. It is one street back from the Shoalhaven River, off River Rd. There is plenty to look at in the surrounding area too.

The Shoalhaven Native Botanic Garden is at 9 Celia Parade, Shoalhaven Heads, between Kiama and Nowra.

It has picnic tables, electric barbecue, toilets and a children’s playground.

It is in a community precinct near the Shoalhaven Heads Men’s Shed and a local early childhood learning centre.

All photos by Rhonda Daniels. Selected text from SHNBG brochure.