Betty Rymer – A passionate lover of native plants, and a consummate educator 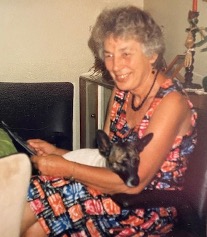 Betty was born on 30 April 1922 on the outskirts of London, where she grew up as an only child of Robert and Florence Pierpoint. She completed a double degree in teaching and biology after the second world war and taught biology at Goldsmiths University in London.

In 1959 Betty married Eric Rymer, and in 1960 they moved to Australia and bought land and built their house in Annangrove Road Kenthurst. In 1964 they welcomed a son, Colin, and in 1969 fostered a daughter, Vicki, as a sibling for him. In 1970 they moved to a house at Engadine in the Sutherland Shire so that Eric, an industrial chemist, would be closer to his work location at Botany. Eric came to Australia to work in a chemical plant, but spent most of his working life in Australia at Johnson and Johnson. They rented out their house at Kenthurst. For several years Betty taught biology at high school and at the University of NSW.

On arrival in Australia Betty fell in love with our native flora, and henceforth her life was spent discovering and learning about it, and in teaching others about it.

Colin attended Engadine High School, and Betty soon organised a garden group for students. One of her projects was to germinate and grow eucalypts for koalas to eat. When the eucalypts were large enough to be planted out, Taronga Zoo would come and collect the small trees in pots.

Vicki went to Heathcote High School, where her science teacher for two years was John Aitken. John met Betty several times at parent-teacher nights. He has been President of the Australian Plants Society NSW now for several years. A remarkable coincidence!

Around 1975 Betty and Eric joined the strong Sutherland Group of SGAP, and Betty joined in their many activities. In 1982 and 1983 Betty assisted Peter Olde with the displays at the SGAP Wildflower Exhibitions at Peakhurst High School. In 1983 Betty and Eric moved back to their home at Kenthurst.

In 1984 Betty was appointed Exhibition Manager, and the venue for the annual show was changed to Castle Hill Showground. The 1984 Sydney Wildflower Exhibition under Betty’s management was extremely successful. Over 13,000 people went through the gates, probably helped by the attendance of media personalities Alan Seale, and Graham and Sandra Ross. Profit from the show was $25,664 – an amazing result!

Betty’s wonderful shows at Castle Hill were on a grand scale. They were massive, and packed full of interest. The many attractions included stunning displays of wildflowers from Western Australia, lots of cut flowers and plants for sale, children’s corner, audio-visuals, demonstrations, raffles, a gumnut competition – guessing the number of gumnuts in a jar, free buses from Parramatta station, a bush band, the direct broadcast of Graham and Sandra Ross’ radio show, barbeques, and food and drink provided by the Red Cross and other organisations.

Betty managed successful shows at Castle Hill in 1984, 1985 and 1986, as well as the Bicentennial Banksia Spectacular in 1988 at Bankstown jointly with Mark Ferrington, and exhibitions at “Spring in the Gardens” at the Royal Botanic Gardens. She also helped organise the successful Wildflower Spectaculars at Rouse Hill in 1994, 1995, 1996 and 1997. As well as attracting thousands of people and making them aware of the beauty of Australian plants, the shows provided much-needed funds for the Society and increased membership. Betty was always lavish in her praise of the many hard-working helpers at her shows, and mentioned them by name in her written reviews.

When Betty and Eric joined the Parramatta and Hills Group in 1983 she was immediately elected to the committee. Thereafter she contributed to the Group in so many ways. She gave many talks and presentations, helped with local plant sales and displays, arranged speakers, organised mid-week bushwalks, and held botany and plant identification classes for members. After a very hot fire went through the bushland at the end of Porters Road Kenthurst in 1991, and again in 2002, the Group under Betty’s skillful leadership laid out grids in five locations to monitor and record the progress of germination and regrowth.

In 1991 Betty was awarded life membership of the Society in recognition of her tremendous contributions to the Society and to native plants over many years at group and regional levels. She served on the board of directors for eight years, contributing to policy and state operations in that time. Later, she personally answered all queries about native plants that came in to the Society’s office.

Eric, Betty’s great love, companion, supporter and helper, always cheerful, with a keen sense of humour and a wide knowledge of current affairs, passed away in 1998.

In an article Betty wrote for the Garden Design Study Group newsletter about saving water, she explained how all the waste water from her house and septic system went into pipes to be dispersed into the garden beds, and listed native plants including ferns that would survive without much water.

One of Betty’s messages with garden design was – don’t interfere with nature. She said “you learn from nature – don’t try to change what you’ve got – look at what nature is telling you to do”. She applied these simple principles when volunteering at the Community Environment Centre Annangrove, where she helped plan and maintain the demonstration waterwise native garden. When Betty moved from Kenthurst in 2011 she donated some of her ferns to be planted in the demonstration garden, which still survive today. This section is affectionately known as “Betty’s fern garden”.

Betty was very active in the Fern Study Group, attending regular meetings and outings and adding to the knowledge of other members. She was a prominent member of the Grevillea Study Group, helping Peter Olde with displays at the large plant sales conducted by the Study Group at Mt Annan and at Peter’s garden at Oakdale. She was also an active member of other organisations, and became President of the Castle Hill Garden Club.

Betty gave many presentations and talks to APS meetings, garden clubs, Probus clubs, similar community groups and at local council events, spreading her vast knowledge and love of Australian plants, and as far as I am aware never referred to notes. The information needed for her stimulating, passionate and free-flowing talks was always neatly assembled in her head!

Betty passed away after a short stay in a nursing home at the grand age of almost 99 on 3 April 2021.

Betty will be remembered as a passionate scientist, researcher, gardener, teacher, writer, and supporter of native plants. She was ever so wise, ever so polite. She was an inspiration, and will be fondly remembered and greatly missed!

See posters from some of the exhibitions in the 1980s here.