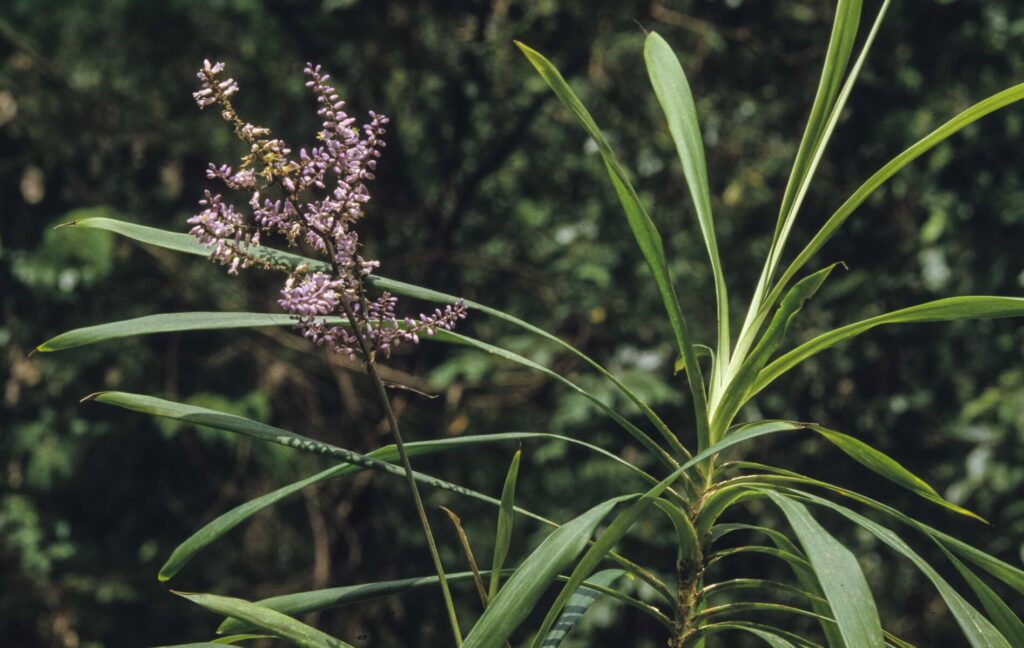 Cordyline stricta is a tall, narrow herbaceous lily-plant to potentially 5 metres tall. North from near Bilpin, NSW, it grows chiefly along the coastal subdivisions into North QLD. Mainly found in wet sclerophyll forest and rainforests. 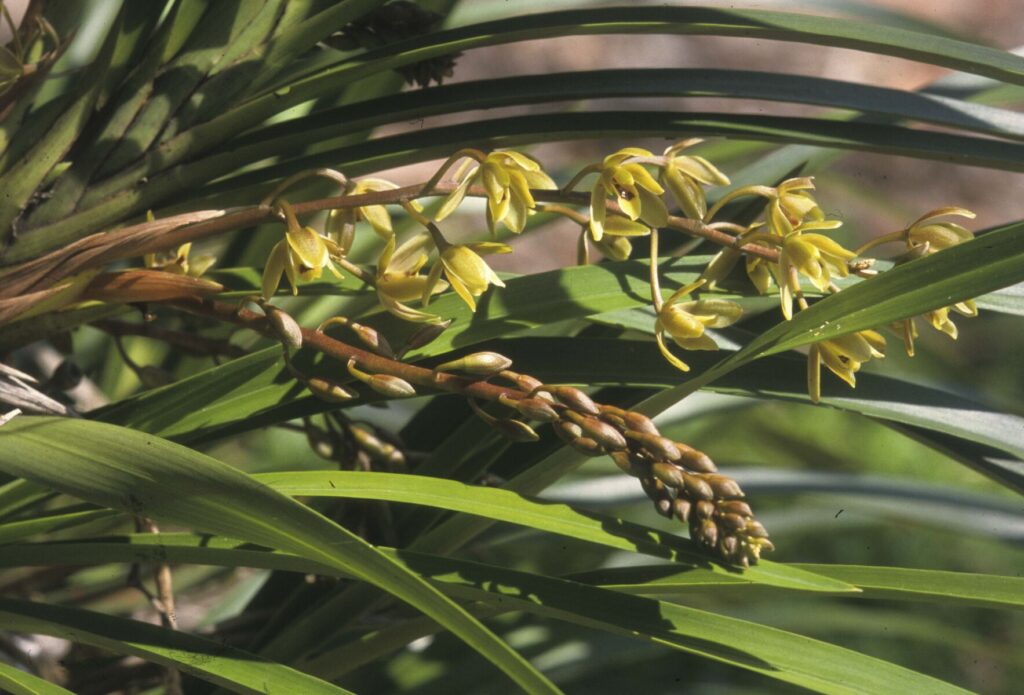 Cymbidium suave is a leafy clumping orchid which sometimes resembles a Lomandra. It is usually seen growing in eucalypt trees as an epiphyte. It is about 0.5 m tall by 0.5 m or more wide and has attractive yellow scented flowers in spring and summer. 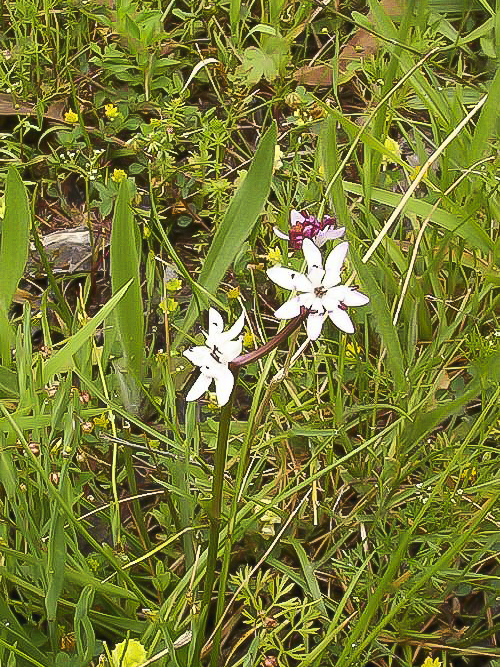 Wurmbea dioica, Early Nancy, is a member of the Colchicaceae family and is a small perennial herb with a corm, two or three annual leaves and a single flowering spike carrying one to eight flowers. Spikes may be up to 30 centimetres tall. Blooms have six petals. They are usually white and appear in spring. Early Nancy is mostly dioecious (male and female flowers on different plants). A small percentage of flowers may have both male and female parts. The fruit is a one centimetre long capsule that contains 10-50 seeds. 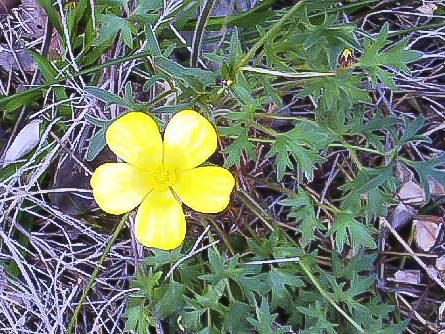 Ranunculus meristus, the Rough-fruited Buttercup or Spinyfruit Buttercup, is a perennial herb that inhabits damp places and belongs to the Ranunculaceae family. The thin leaves are bright green and divided into many linear segments up to two millimetres wide. Flowers are typical shiny buttercup yellow with from 7 to 11 petals. 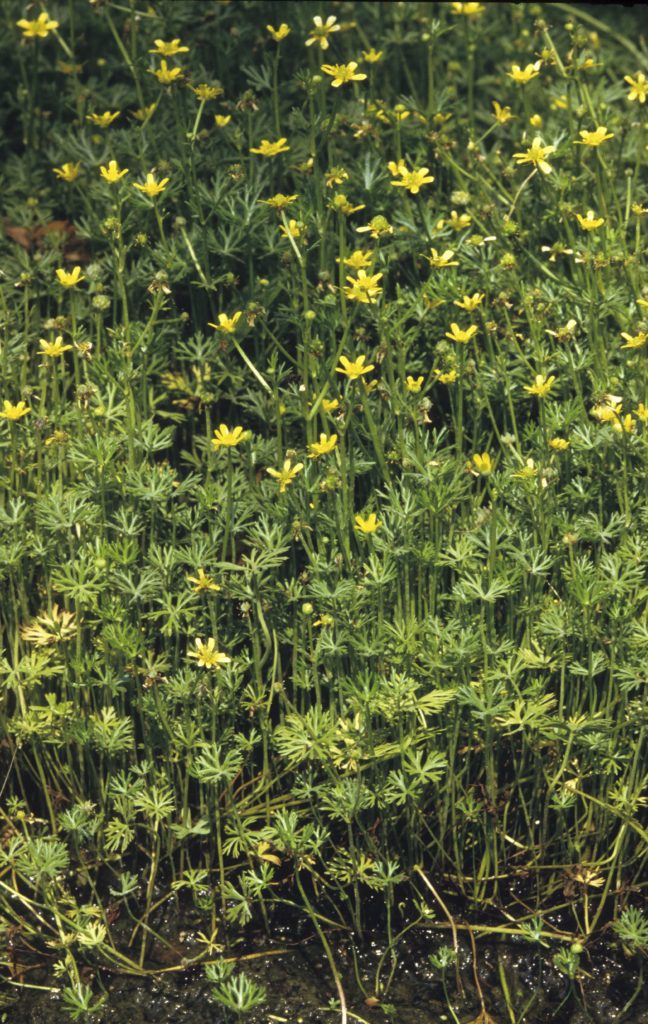 Ranunculus inundatus, River Buttercup, is an aquatic or semi-aquatic perennial. The Buttercups are members of the Ranunculaceae family. The leaves are mid green, divided into numerous lobes, and held on a 15 centimetre petiole. Flowers are shiny yellow, 1.5 centimetres across with 5-7 petals and held above the foliage by 30 centimetre stalks. 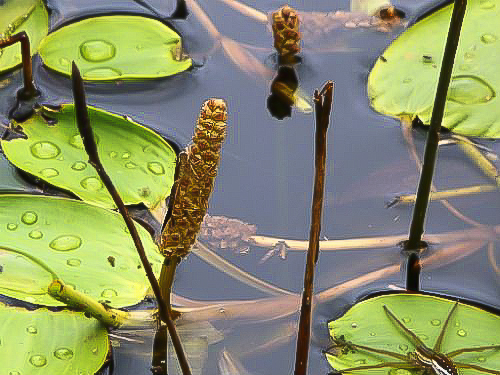 Potamogeton tricarinatus is a perennial aquatic herb commonly known as Floating Pondweed and is a member of the Potamogetonaceae family. Plants have creeping rhizomes, stems that may be up to four metres long, submerged and floating foliage and emergent inflorescences. 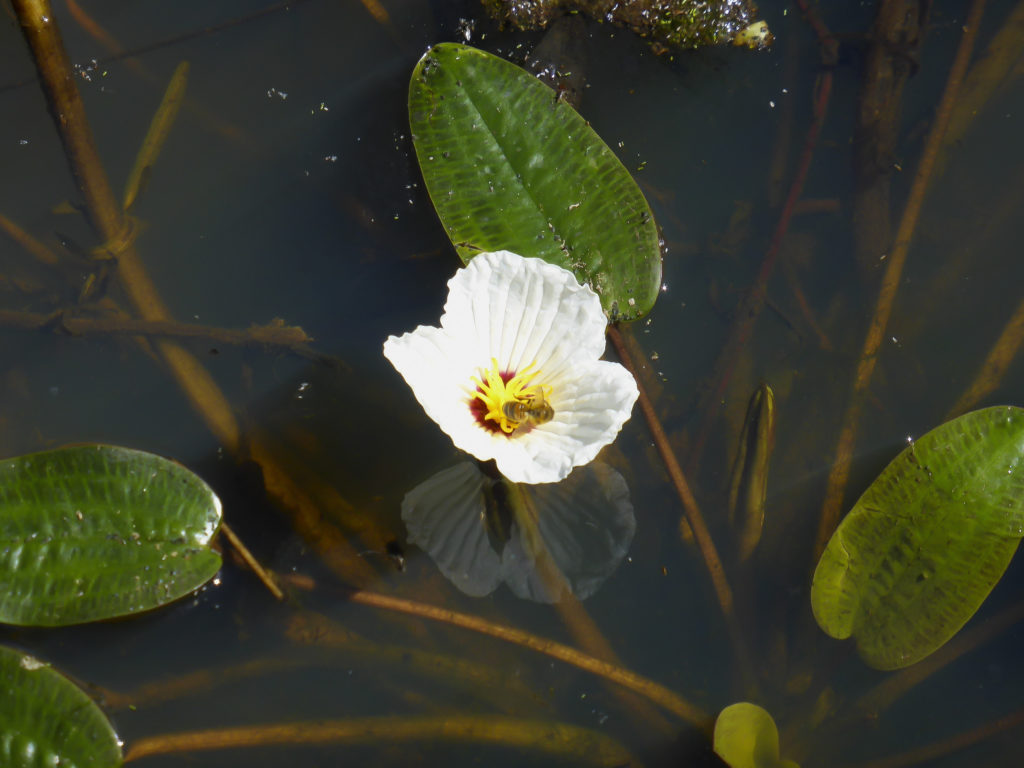 Ottelia ovalifolia, Swamp Lily, is a tufted aquatic perennial with floating and submerged leaves and flowers. The visible leaves are strap-like, up to 16 centimetres long and six centimetres wide. Plants produce two types of flowers. One does not emerge and self pollinates without opening. The other is held, above the water, on a stalk up to 30 centimetres long. 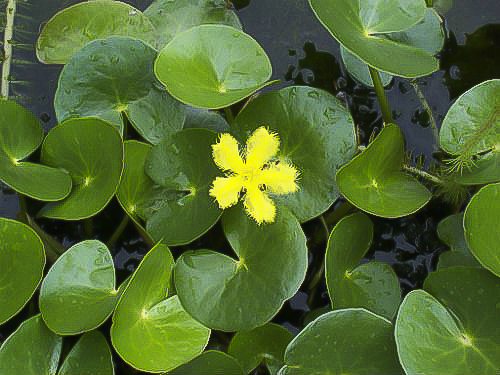 Nymphoides germinata, the Entire Marshwort, belongs to the Menyanthaceae family and is an aquatic perennial. The Entire Marshwort has floating leaves that are almost circular, up to ten centimetres across, mid green glossy above and dull green and dotted below. In our ponds Leaf Green Tree Frogs sit on the leaves. 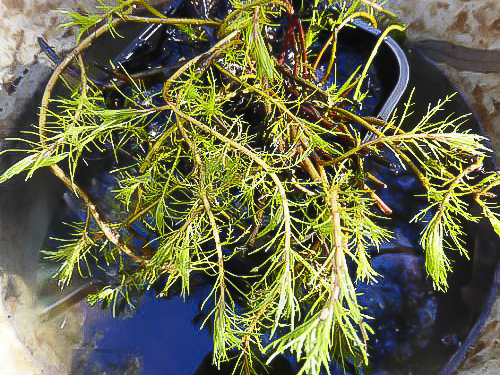 Myriophyllum species are known as Water Milfoils and are members of the Haloragaceae family. Our skill at the taxonomy of this genus leaves a lot to be described. This article will describe Water Milfoils in general as they are very similar in appearance. Myriophyllums are freshwater aquatic plants whose distribution is cosmopolitan. There are about 69 species with Australia the centre of diversity with 37 endemic species and 5 naturalised. 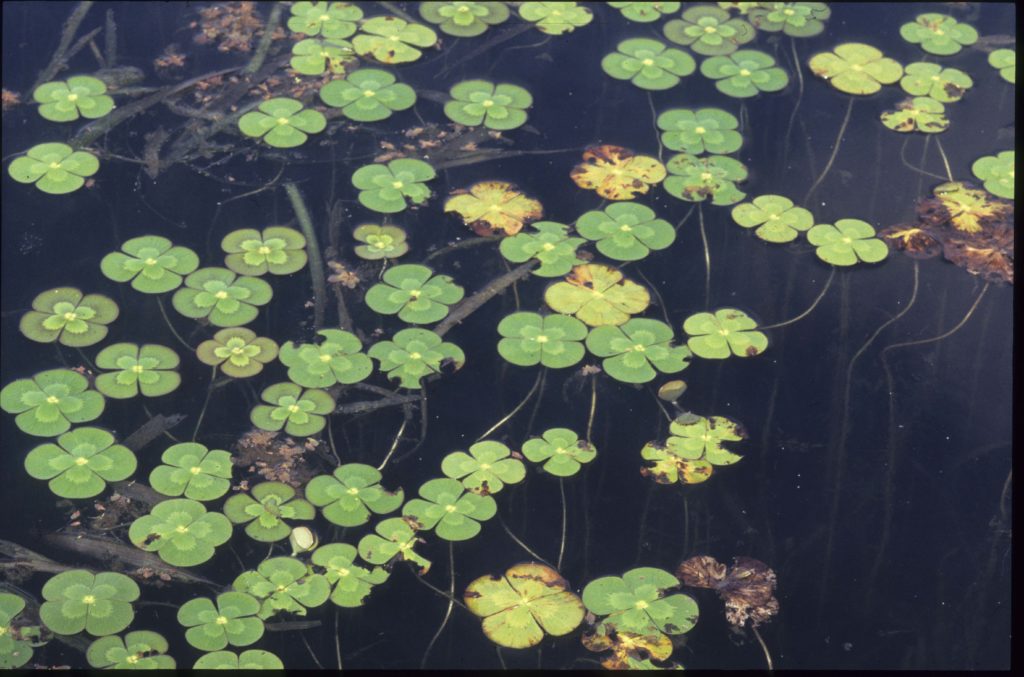 Marsilea mutica, Banded Nardoo, is a member of the Marsileaceae family. There are about 65 species worldwide with 6 endemic to Australia. They are aquatic ferns that grow in wet soils and still to slow moving water. This plant has a long, creeping rootstock. The fronds resemble aquatic four-leaf clovers. Each leaflet is up to five centimetres long, wedge-shaped, bright green with a brownish band about halfway along the frond. 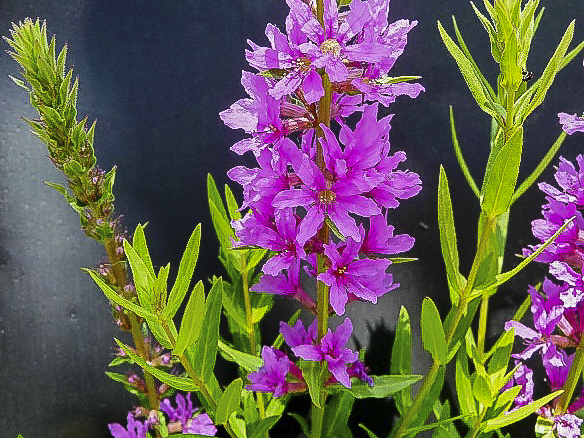 Lythrum salicaria known commonly as Purple Loosestrife, is an interesting species native not only to Australia but widespread in Europe, Asia and North America. In Australia the species occurs in all eastern states including Tasmania. This perennial herb reaches a height of 1.5 metres and usually has a number of erect stems. Leaves are up to seven centimetres long and may be opposite or in whorls of three. Flowers are held in long, terminal spikes and are pink-purple or bluish. Flowering extends from November to May. The blooms are an eye-catching feature. 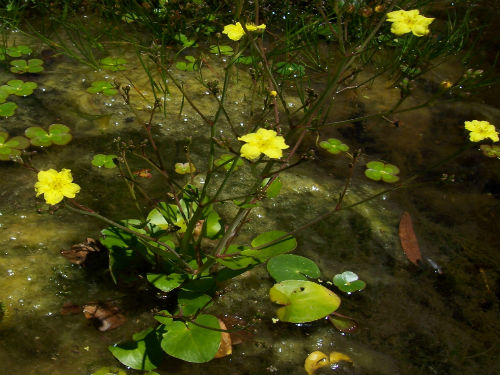 Liparophyllum exaltatum is a member of the Menyanthaceae family and is commonly known as Erect Marsh Flower. It is a perennial aquatic herb with an underground stem and fleshy roots. The dark green, thickish leaves are kidney-shaped, round or heart-shaped. They are held on 75 centimetre long stalks. 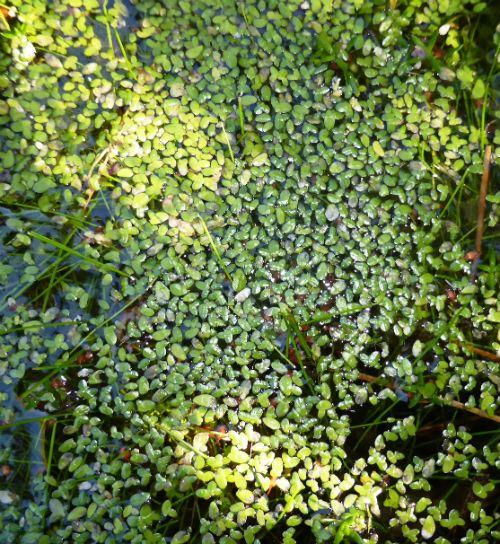 Lemna minor, Duckweed, is a floating aquatic that forms dense, bright green mats. Plants have one, two or three leaves with a root hanging in the water. Leaves are oval and up to eight millimetres long. They have small air spaces to aid buoyancy. Reproduction is mainly by division. 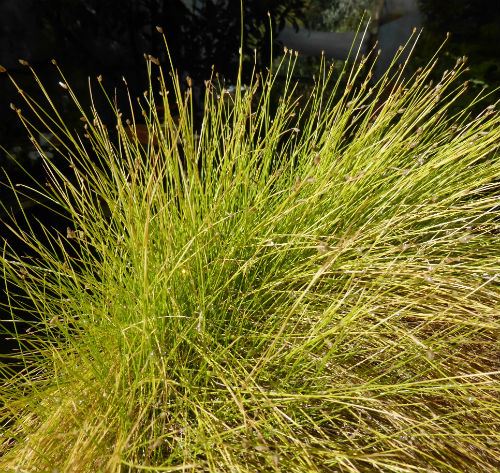 Isolepis cernua, Fairy Lights or Nodding Club-rush, is a member of the Cyperaceae family. Fairy Lights are low-growing, rush-like perennials with a clumping growth habit. Arching, grass-like leaves are light green up to 30 centimetres long. Each stem is crowned by a silvery spikelet (basically a small flower head). 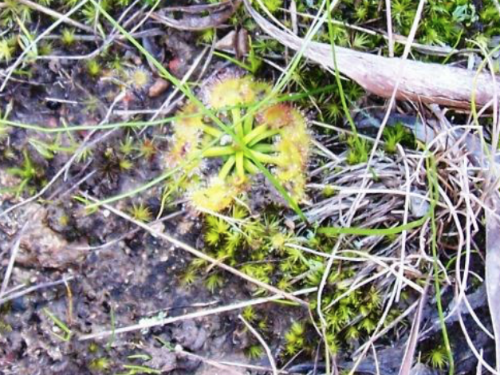 Drosera hookeri, in common with all Sundews, is a carnivorous plant that traps insects on specialised hairs carried on the margins and upper surface of the leaves. The hairs are known as tentacles. The soluble parts of the prey are absorbed by enzymes released by the tentacles. 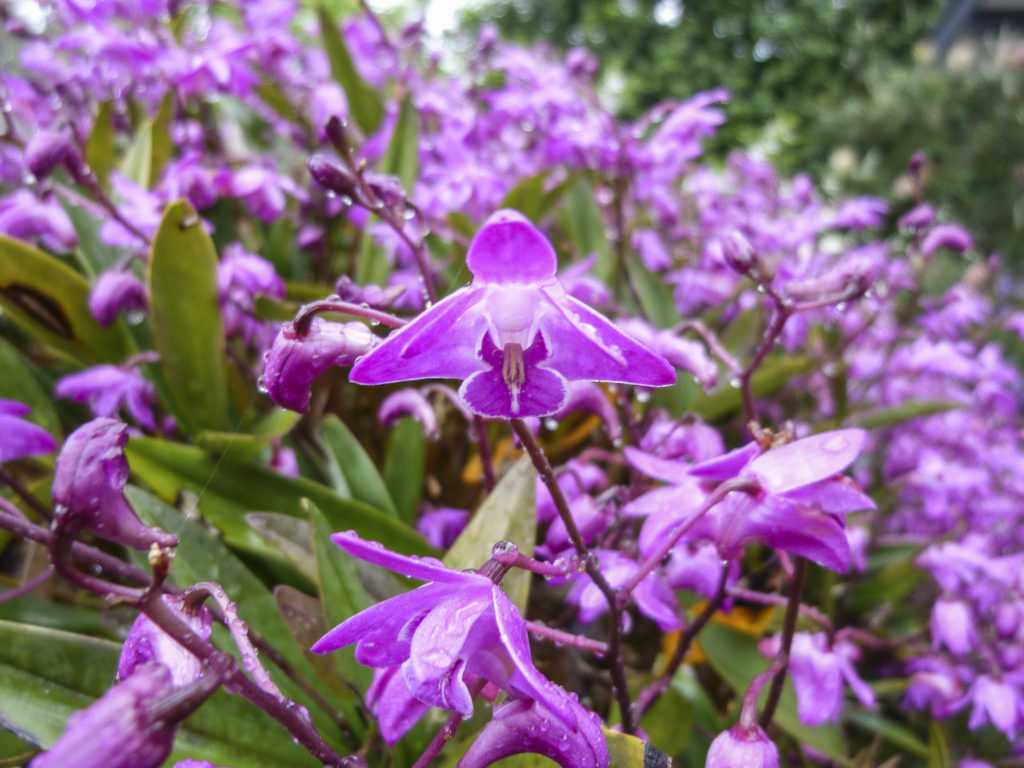 The common name of Thelychiton (Dendrobium) kingianum is ‘Pink rock orchid’ and as you can see, my species is a very dark pink coloured form and an outstanding reliable plant for any garden with a few rocks. This species occurs naturally along eastern Australia from just above Newcastle to the central Queensland highlands and grows naturally on rocky surfaces. 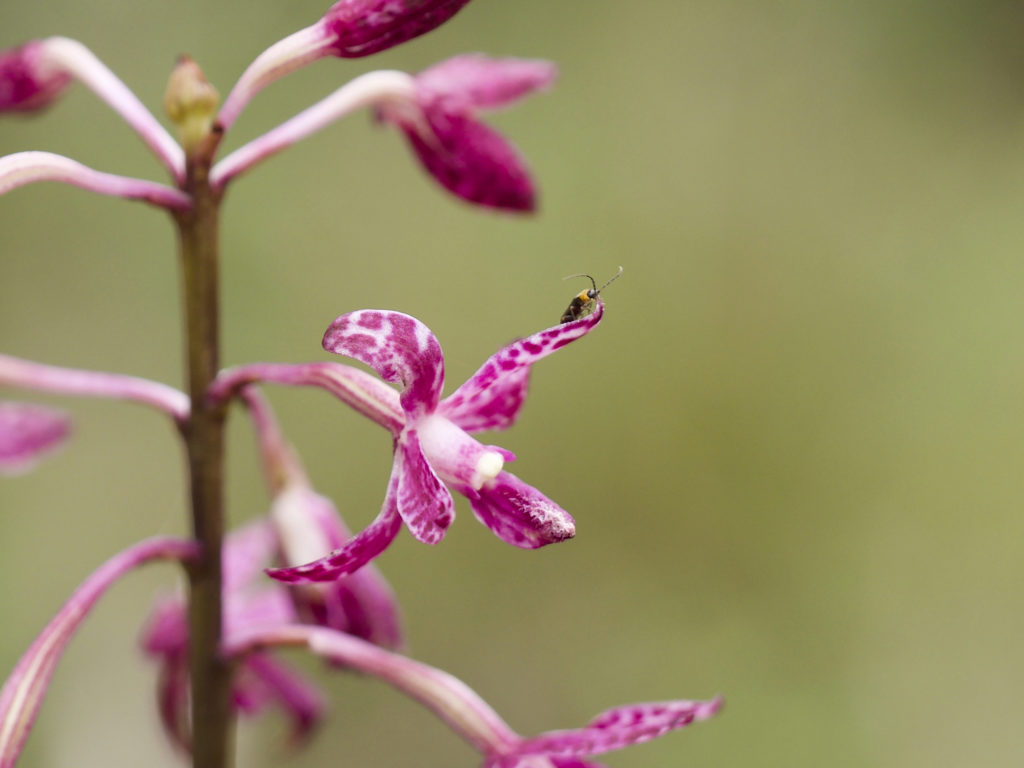 Dipodium punctatum, the Hyacinth Orchid is a leafless, terrestrial orchid. Usually one or two spikes carry up to 50 deep purplish-red hyacinth-like flowers. The photo shows an exceptional flowering with eight spikes growing close together. Summer is the peak flowering season. 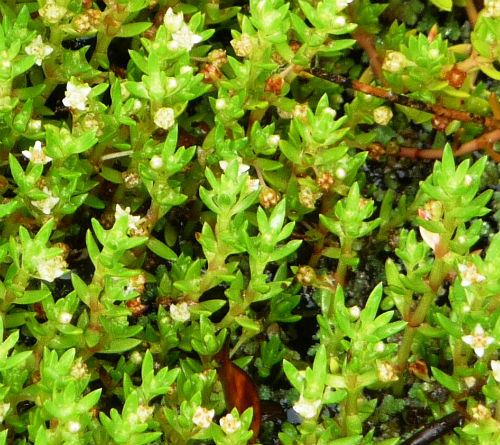 Crassula helmsii, the Swamp Stonecrop, is an aquatic or bog plant. Plants may creep or float depending on the depth of water. Stems will reach a length of 30 centimetres. Small leaves are succulent, linear, and green or reddish in colour. Small white flowers are carried in the upper leaf axils. Flowering is prolific in spring.